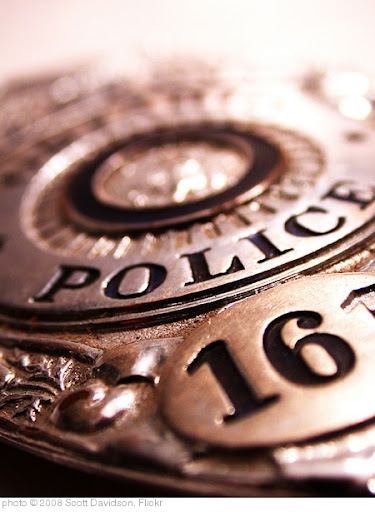 Another post from Renee of Womanist Musings, who is all that and four bags of ketchup flavored potato chips.

I have written many articles on how I intend to teach my sons how to
behave in the presence of cops, and why this information could someday
save their lives.  Each time I write about the absolute importance of
preparing a Black child to deal with the ongoing harassment that they
will be subject to, thanks to racist police departments across North
America, some jackass shows up with statics to claim that the police are
justified in their response because of the fact that Blacks are over
represented in the penal industrial complex.   This response is racist
and denies the way in which minorities are specifically targeted and the
effect of racism, under-education and poverty have on those who commit
crimes. The truth of the matter is that though there are more Whites in
prison than Blacks, Black people still represent criminality in the eyes
of the law.  This leads to a lifetime of harassment that can have a
devastating toll.

I found the following article in the N.Y. Times.

WHEN I was 14, my mother told me not to panic
if a police officer stopped me. And she cautioned me to carry ID and
never run away from the police or I could be shot. In the nine years
since my mother gave me this advice, I have had numerous occasions to
consider her wisdom.

One evening in August of 2006, I was celebrating my 18th birthday with
my cousin and a friend. We were staying at my sister’s house on 96th
Street and Amsterdam Avenue in Manhattan and decided to walk to a nearby
place and get some burgers. It was closed so we sat on benches in the
median strip that runs down the middle of Broadway. We were talking,
watching the night go by, enjoying the evening when suddenly, and out of
nowhere, squad cars surrounded us. A policeman yelled from the window,
“Get on the ground!”

I was stunned. And I was scared. Then I was on the ground — with a gun
pointed at me. I couldn’t see what was happening but I could feel a
policeman’s hand reach into my pocket and remove my wallet. Apparently
he looked through and found the ID I kept there. “Happy Birthday,” he
said sarcastically. The officers questioned my cousin and friend, asked
what they were doing in town, and then said goodnight and left us on the
sidewalk.

Less than two years later, in the spring of 2008, N.Y.P.D. officers
stopped and frisked me, again. And for no apparent reason. This time I
was leaving my grandmother’s home in Flatbush, Brooklyn; a squad car
passed me as I walked down East 49th Street to the bus stop. The car
backed up. Three officers jumped out. Not again. The officers ordered me
to stand, hands against a garage door, fished my wallet out of my
pocket and looked at my ID. Then they let me go.  (Source)

Nicholas
K. Peart wrote specifically about his experiences living in N.Y. city,
however the same story could be told by many people of colour living in
North America, because despite the so-called post racial world that we
live in, part of the role of policing today is to enforce White
supremacy.  This means the ongoing harassment of people of colour, which
for some leads to a lifetime of living in fear.  I would label some of
the survivors as existing with PTSD but the fact of the matter is that
we still have not entered the era when the word post is an accurate
label.

We live in a world in which it is largely understood that people of
colour, regardless of their gender, or sexuality are perceived of as
violent, drug dealers, drug users, hyper sexualized and problematic,
while Whiteness is understood to be the eternal victim.  This ahistoric
view only exists because Whiteness continues to ignore and actively
negate the history of violence it has perpetrated against people of
colour. Slavery ended years ago, but people of colour are still being
slaughtered.  Violence has not always taken the form of physical
punishment, and in fact, on a daily basis it is often realized through
impoverishment, character assassination, and a lack of education.
Violence need not leave any physical markers to be understood as
violence.

Black children exist with a scant few years of innocence, and the belief
that they are equal, before Whiteness begins its project of othering
and dehumanization.  When I look at my six year old son, I know that he
is in the last cusp of mental freedom, before the active persecution
begins.  It is important to note however, that through his access to
media, and by media I mean everything from television, to the internet,
to books, and movies, he has already begun to internalize the passive
racism that Whiteness is so very proficient at.

The police are only free to perform in the manner that they do because
they are the military arm of Whiteness.  I know that there are cops of
colour who do attempt to make a difference policing our communities, but
they are overwhelmed and must still to some degree subscribe to the
over arching message of oppression.  To be of colour in this world, is
to be a continual target of aggression and hatred, despite the fact that
so many White people openly declare themselves to be non racist.  Being
called a racist has reached the level in the minds of many to being
akin to a slur, though in actuality, it only really serves as a marker
of privilege.  No matter how well intentioned, or if your best friend in
grade school was Black, to be White is to participate in passive racism
at the very least, and to benefit from every single act of racism.

No matter how we struggle against our oppressor, until every single
White person is actively engaged in challenging their privilege, the
state of unequal in life, in every single social institution, and every
single situation will continue to be a reality for people of colour.
Reading this may cause shock, dismay and even outright denial, but until
you are actively attempting to decolonize your mind, and challenging
the status quo, you support the racist actions engaged in by police
departments across North America.  Pretty platitudes about shock and
awe, get us nowhere.