The New Hampshire primary election is happening as I write this post, and while the Sanders folks are gleeful about the expected win in this state that is 98% white and next door to Vermont, what the Sanders folks fail to acknowledge is that many Black voters, who are a critical election bloc in the series of election contests leading up to Super Tuesday on March 1, aren’t ‘Feeling The Bern‘.

And as we saw in 2008, never count out a Clinton in New Hampshire. Texas is one of the Super Tuesday states, and we will start casting ballots for it when early voting starts next Tuesday.

While Black millennials may be ‘feeling the Bern’, the group of Black voters you have to convince to go to the polls for you is my Baby Boomer, Generation X and Generation Y group of voters who show up at every election.   Voters over 30 make up 67% of the electorate.

Black elders like myself who voted and supported Bill Clinton twice back in the 90’s and reaped the benefits of the economic boom his policies ushered in aren’t buying the attack lines the Sanders campaign is selling about the former Secretary of State.

We saw her as the First Lady in 1993 leading the charge to get universal single payer health care passed against tremendous Republican opposition.

The last time I decided to waste time watching that ongoing reality TV show called the 2016 GOP presidential debates, it didn’t go unnoticed to me that the only person they were attacking on that clown car stage was Hillary Clinton, not Bernie Sanders.

And naw, we Black voters haven’t forgotten it was Bernie Sanders who called for a 2012 primary challenge of President Obama, which would have caused a civil war in the Democratic Party and probably led to the election of Mitt Romney as president.

He also has a problematic stance when it comes to guns in voting to give gun manufacturers legal immunity from mass shootings. 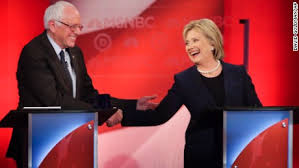 It’s easy for white millennials to get hyped and think Sanders has a chance.  He did because the first two 2016 primary electoral contests were in Iowa, which is 90.2% white (vs 3.2% Black, 4.4% Latinx, and 2.6% Asian) and New Hampshire being 97% white and next door to Sanders’ home state of Vermont.   And despite a late Sanders surge in Iowa, Hillary Clinton still won there, and New Hampshire’s winner is yet to be determined.

But once these contests are over, the primaries head to states that have larger percentages of non-white voters like Nevada on February 20 (26% Latinx population)  and South Carolina on February 27 with Super Tuesday on March 1 looming.

South Carolina, where Black voters are 27% of the population and make up a sizable percentage of the electorate, is polling 62%-35%  for Clinton

And in more bad news for Sanders supporters, the twelve states and territories conducting Super Tuesday primaries on March 1 in which 878 Democratic delegates will be up for grabs, six of them are in the South (TX, TN, GA, VA, AR, AL) and have sizable African-American populations.

And yes, I’m personally getting sick of the Berniebros sexist online dissing of women and belittling Black people who aren’t feeling their candidate, and it’s starting to push me and others out of the neutral camp to ‘leaning Hillary’.   To Bernie’s credit, recognizing the damage they are doing to his efforts to reach out to non-white voters, he also called them out.

Bernie’s people and supporters have failed to realize it is Black voters who are the base that Democratic electoral majorities are built upon, and we must be wooed just like other liberal progressive blocs are.

As Houston United learned the hard way last year, you cannot come to my community hat in hand at the last minute and think you’re going to win our support and our votes.

So if Sanders is going to win the Democratic nomination, he better solve the problem of why African-Americans aren’t ‘feeling the Bern’ fast.