The iconic NBC Sunday morning interview show Meet The Press under current host David Gregory has slid to a distant third in recent ratings for the Sunday morning news talk shows, and rumors are flying amongst the chatterrati that Gregory is about to get canned for it.

The rumored replacements for Gregory should this turn out to be true are Joe Scarborough and Chuck Todd.

Time for me to go into Maya Wilkes mode at the thought of either of them in that iconic Meet The Press chair.

If NBC thought their ratings are bad now with Gregory, if they make that colossal programming mistake, wait until they tank still further with either of those two in the Meet the Press anchor chair.

Instead of putting another conservative leaning white male in the chair, I submit NBC needs to do something bold since they are bringing up the ratings rear anyway.

Those Sunday morning talk shows are highly influential programs and set the tone for political inside the beltway discussions and Capitol Hill debates.  Those shows have been dominated for far too long by white male 50+ conservative Republicans, and it’s past time to clear the stagnant vanillacentric privileged air and add the thoughts and opinions of other people who live in this diverse country of ours.

It’s past time to put a journalist of color or a female one in that chair to break up the Washington Conservative Boys Club and bring perspectives and questions into these discussions that white male journalists because of their privilege and other societal blind spots wouldn’t think to ask.  .

Rachel Maddow seems to be the person that chattering class peeps are frequently thinking and talking about as a possible candidate to replace Gregory in that chair should NBC execs pull the trigger and fire him.

I have another suggestion for a possible replacement that people are ignoring:  Gwen Ifill.

Gwen Ifill is a longtime journalist and political analyst who moderates and is the managing editor ofWashington Week on PBS.  She a Simmons College grad who has worked for NBC, the Washington Post and the New York Times.  She is the co-anchor with Judy Woodruff of the PBS NewsHour.   She has also been the moderator of the 2004 and 2008 Vice Presidential debates.and has appeared on Meet The Press herself.

So with that pedigree, why hasn’t she been suggested to take over the hosting duties for Meet The Press?

Do I have to state the obvious here?

As for the two rumored leading candidates to take over the Meet The Press spot, neither Chuck Todd or Joe Scarborough moderated TWO Vice presidential debates as Ifill has.  Neither have worked for the Washington Post (1984-91), the New York Times (1991-94) and NBC (94-99) as Ifill has in addition to hosting two PBS news shows? 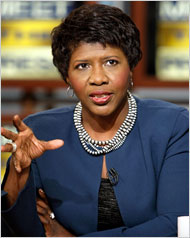 And if NBC did name Ifill, it’s a win-win on multiple levels.  They get to make history, take a bold step toward diversifying one of the whitest hours of television, bring one of their former journalists back, and are guaranteed to get a ratings bump because liberal-progressive peeps like me who got tired of Gregory and the conservative white men he panders to will come back to the show, especially if Ifill is hosting it.

So NBC programming execs, what are you waiting for?