Tomorrow I get to park in front of the television and watch the opening ceremonies.herald the start of another Olympic Games.

Ever since the Grenoble winter games of 1968 and the summer ones in Mexico City later that year I have looked forward to watching the Olympiads and their drama filled stories unfold.

I love the opening ceremonies and how each host nation puts their interpretation on it.  I love the Olympic flame eventually being lit and discovering along with everyone else in the stadium what Olympic athlete from the host nation’s Olympic sporting past gets the honor of doing so.

Conversely, when the two to three weeks of competition is over, I’m a little sad when the Olympic flame gets extinguished because it means it’ll be another four years before the world gathers again for summer (or winter games) competition.

I like watching the various competitions in sports I rarely see on television such as fencing, team handball, archery, and countless others being contested on an Olympic stage.

The ones I do get to watch on a regular basis such as basketball, soccer, boxing and athletics take on another high stakes meaning when the competing teams are playing for not only national pride, but to stand on the highest step of the Olympic victory platform and hear their nation’s national anthem played with a gold medal around their neck.

There are all the dramatic storylines that develop during the various Olympic competitions that play our during that Olympiad.   You’ll have the athlete who need the performance of a lifetime to win a medal and does just that..  The person who comes seemingly out of nowhere to become the Olympic champion.  The favorite who stumbles just short of Olympic glory.   The team that fails to qualify for the medal round in their sport or the unheralded squad that does so and makes a deep run in the medal rounds to do so.

There’s also the persons who through their performances and their expressive personalities become international stars or conversely villains because of nekulturny behavior or poor sportsmanship. 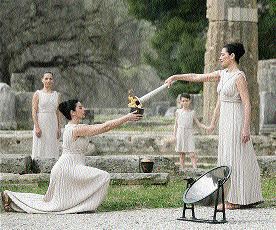 The moments when you get to see the slice of life stories featuring the host nation and the scenic parts of it, the interviews of medal winning athletes and life in the Olympic Village for every one of us who ever dreamed as kids of being Olympians but didn’t quite have the talent to make it happen.

It’s also the knowledge that while you’re watching the Olympic games, for the two weeks you’re watching this sporting extravaganza unfold that has its roots in the ancient Greek festival, so is everyone else on the planet.

I think the major reason I love the Olympic Games is that the world during those two weeks feels a little more unified during the time the Olympic flame is burning.