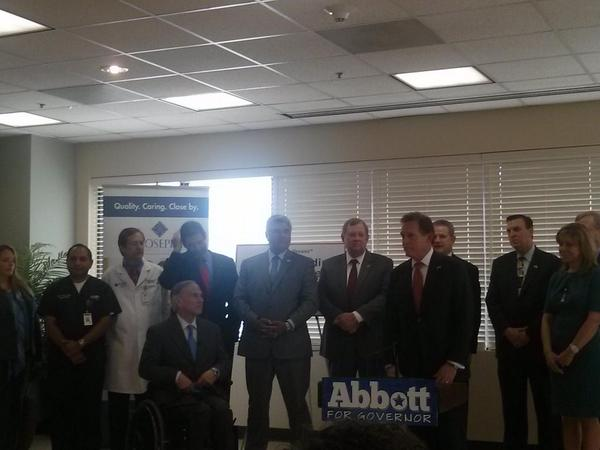 Can you spot what’s missing in this photo?

If you said women, you’d be correct.

Yep, as a foot soldier in the GOP War on Women, he has been as our state’s attorney general defending the draconian HB2 law that if enforced, would result in the shutdown of all but 5 abortion clinics in the entire state.

Last Friday federal Judge Lee Yeakel (GW Bush appointee) struck down the provision in HB 2 that requires every abortion clinic meet the state’s standards for the building, equipment and staffing for hospital-style surgery centers.  Yeakel also reinstated the block of another odious provision of HB 2 that requires providers to have admitting privileges in a hospital no more than 30 miles from the facility for two clinics located in El Paso and McAllen.

The rule “is unconstitutional because it imposes an undue burden on the right of women throughout Texas to seek a pre-viability abortion,” Judge Yeakel wrote.

Over all, he concluded, with the new closings that would have been forced by the surgery-center rule, many more women would be hours from a clinic. “Even if the remaining clinics could meet the demand,” he wrote, the impact, between long travel times and other practical impediments many women face, would be as drastic as “a complete ban on abortion.”

Judge Yeakel wrote, “The great weight of the evidence demonstrates that, before the act’s passage, abortion in Texas was extremely safe, with particularly low rates of serious complications and virtually no deaths.”

But back to the jacked up photo-op.   Greg was probably trying to deflect from the fact he has been diligently working to keep HB 2 in place, withdrew from a scheduled September 30 debate with Wendy Davis and after taking heat for it, agreed to two debates in Dallas and McAllen.

Greg just keeps causing more problems for himself.  If you wonder why I call Abbott’s campaign ‘Clayton Williams 2.0‘, now you know.