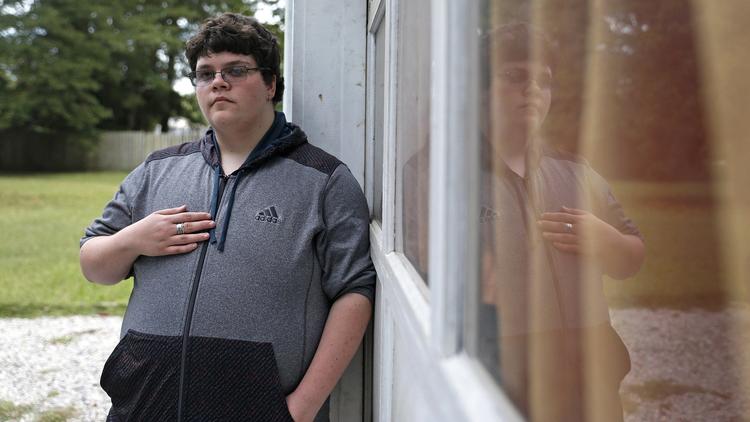 In a closely watched case that will possibly have an effect on North Carolina’s Hate Bill 2,  a federal appeals court ruled today that a policy barring Virginia trans masculine student Gavin Grimm from using the bathroom matching his current gender presentation at his high school is unconstitutional!

The three judge panel of the US 4th Circuit Court of Appeals in Richmond, VA  overturned the Gloucester County School Board’s unjust policy in a 2-1 decision.

US District Court Judge Robert G. Doumar  (Reagan appointee) last year had previously sided with the Gloucester County School Board in the GG vs Gloucester County Schools case, denying Grimm’s sex discrimination claim because in his words, ‘Title IX prohibits discrimination on the basis of sex and not on the basis of other concepts such as gender, gender identity or sexual orientation.”

‘Because we conclude the district court did not accord appropriate deference to the relevant Department of Education regulations, we reverse its dismissal of G.G.’s Title IX claim. Because we conclude that the district court used the wrong evidentiary standard in assessing G.G.’s motion for a preliminary injunction, we vacate its denial and remand for consideration under the correct standard.  We therefore reverse in part, vacate in part, and remade the case for further proceedings consistent with this opinion.’ The Justice Department filed a ‘statement of interest’ in this case declaring that failure to allow transgender students to use the bathroom that corresponds to their gender identity was sex discrimination. .

“I feel so relieved and vindicated by the court’s ruling,’ said Grimm in a statement released from the ACLU. “today’s ruling gives me hope that my fight with help other kids avoid discriminatory treatment at school.”

Stay tuned, because we trans folks may have just gotten another legal hammer to whack HB 2 with

This case also emphatically points out that elections not only matter, the person sitting in the Oval Office selecting who goes onto these federal judicial benches matters, too.