To underscore the sea change that has happened in Canada since the Prime Minister Justin Trudeau and his Liberal Party have taken control from the Conservatives, yesterday for the first time in Canadian history, in honor of LGBT Pride Month,  the rainbow pride flag was raised on Parliament Hillin Ottawa.

The flag will fly on a temporary pole set up on Centre Block, and many members of the Liberal Party caucus were in attendance at the event, including several openly gay MP’s. 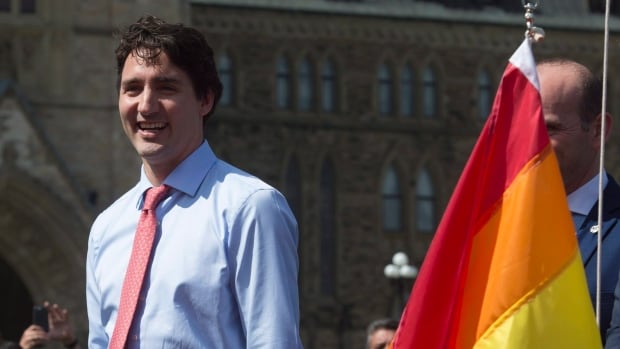 “This is a great day for Canada and it’s part of a long series of milestones this country has hit over the years,” said PM Trudeau.  “It hasn’t been easy, it hasn’t been automatic, a lot of people fought for a long time for this day to happen..”

“Canada is united in it’s defense of rights and it’s standing up for LGBTQ rights,” said Trudeau as he noted the attendance of all the parliamentary parties at the ceremony..  “And quite frankly, we still have more work to do,” he added as he talked about C-16, the trans rights bill his government just tabled several weeks ago.. .

We’ll see how C-16 progresses, but for my Canadian LGBT cousins, this is a wonderful and historic time to be in their nation.