‘The bottom line is that the HERO opposition has been since last May disseminating lies about HERO unchallenged. This election will probably be decided in Black neighborhoods, and we must get accurate information to our people to counteract the right wing lies.’ –TransGriot September 30, 2015

I hope that on November 3 I’m in the position to report some wonderful news when it comes to the Houston Equal Rights Ordinance, but right now what I’m hearing is disturbing but something I and the Houston Black LGBT warned about months ago.

Early voting it over, and it’s being reported that the anti-HERO forces have an edge going into Tuesday.  The thing that makes me have some shred of optimism about these reports is two of the three local political scientists reporting this have been wrong multiple times.

I hope I’m wrong on November 3, but as many of you longtime readers of this blog are aware of, I have this propensity of being correct about political and other stuff.

It’s also a problematic sign of this Prop 8 2.0 campaign as I called it in my October 6 interviewwith political blogger Charles Kuffner when the Houston NAACP has their awards gala last night at the Hilton Americas Hotel and there is ZERO mention about a human rights ordinance that protects the entire populace, and was driven by discrimination aimed at African-American Houstonians.

Time for a Keeping It Real moment from Christina Gorczynski pointing out all these anti-HERO peeps who have ‘concerns about women and children’ have been all talk and no action.

Hey Houstonians: Just a quick ‪#‎HERO‬ observation and a little Houston history. Not long ago, Houston had years of backlogged untested rape kits– and these anti-#HERO fear-mongering potty police were NOWHERE to be found. They were not running commercials advocating for safety for women and girls, and they were certainly not out protesting for justice for sexual assault victims in our city.

IN FACT, the person who took the lead, fought for funds and showed a drive for justice was our Mayor Annise Parker– the very person you are lying about and accusing of making women and children unsafe in bathrooms. She worked with our city council and our state and federal legislative delegations to get the funding necessary to successfully alleviate the untested rape kit backlog. She made it a mission to make sure that women and children in Houston were safer and that people who violated women and children were held accountable. Without much fanfare, she worked hard for us. And our city should be grateful for her leadership. (Olivia Benson would be proud.)

So some REAL TALK: If all these anti-#HERO assholes really gave a flying fuck about the women and children in Houston, they would have given a damn then. If they actually cared about supporting women and children in crisis, they’d be giving hundreds of thousands of dollars to the Houston Area Women’s Center or the women’s ministries at their respective churches instead of buying TV ads to scare women and make us feel afraid in our own city, all under the guise of keeping us “safe.”

Frankly, If these DUDES really wanted to protect women, they wouldn’t be lying like dogs to each and every one of us with this nutjob shit about bathroom predators. And if they really respected women and children– and I mean ALL WOMEN including trans women and ALL CHILDREN including trans children, they wouldn’t be sitting around thinking of creative and completely dishonest ways to make us afraid of sexual violence every time we leave the house.

#HERO protects women. Period. Anyone who tries to tell you otherwise is knowingly or unknowingly full of shit. ‪#‎hardstop‬ 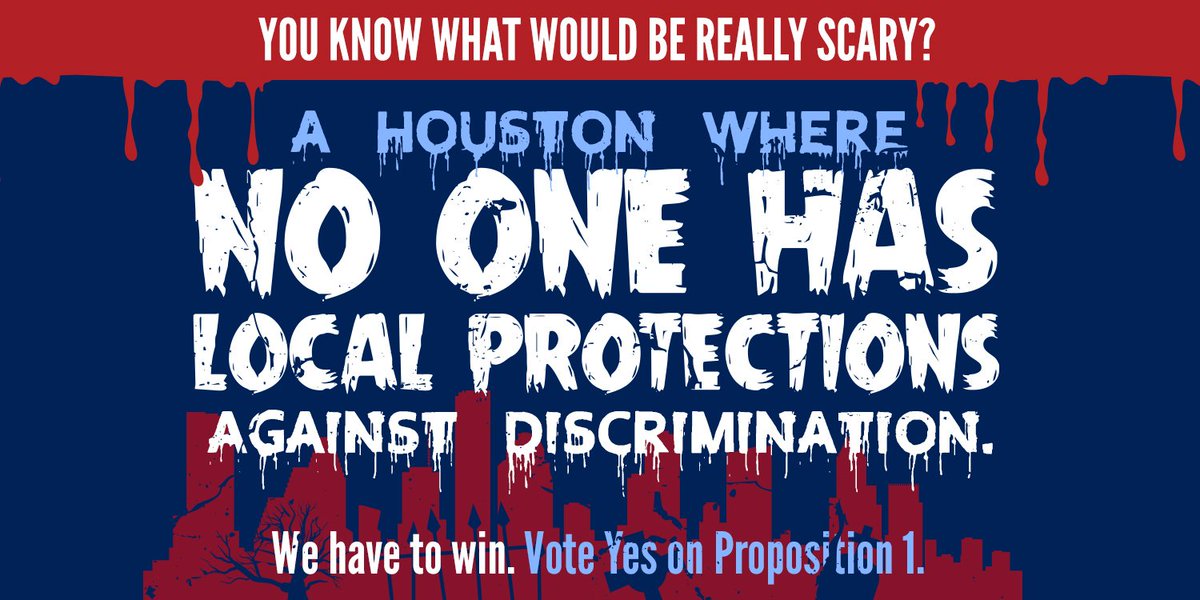 HERO also protects 14 other categories of Houstonians and it’s worth fighting for.  Would be a shame if my fellow Houstonians allowed themselves to be hoodwinked and bamboozled into voting against their own human rights.