Today is the last day of early voting in H-town for the upcoming mayoral election and voting YES for Prop 1 and the ads are flying.   Another pro-Prop 1 ad rolled out this week as an anti-HERO ad featuring Texas Lt. Governor Dan Patrick hit the airwaves.

We have had in the runup to Election Day some political heavyweights comment on the HERO vote in President Barack Obama and Vice President Joe Biden.

“While the Administration generally does not take a formal position on specific proposals or initiatives, the President and Vice President have been strong supporters of state and local efforts to protect Americans from being discriminated against based on who they are and who they love. We’re confident that the citizens of Houston will vote in favor of fairness and equality.

”Democratic presidential candidate and former Secretary of State Hillary Clinton has also weighed in on the HERO fight.. 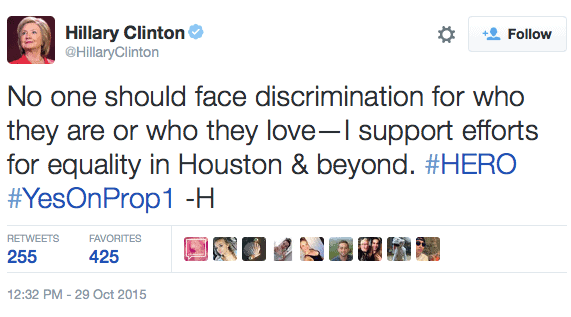 Hollywood has chimed in as well.  Native Texans Matt Bomer and Eva Longoria have also tweeted their support of the Houston Equal Rights Ordinance.

We have had actress Sally Field, who has Texas family roots and is an award winning women’s rights advocate, weigh in on the HERO at an event Wednesday night, and repeated her commentary Thursday morning at an event for women legislators at the Alley Theater.

News coverage on the local and national level about this fight continues.  The Houston Chronicle in another editorial called out Lt Governor Dan Patrick for outright lying about the ordinance.

But I’m still concerned along with the Houston Black LGBT community this late swell of positive endorsements may be too little, too late.   Polling has tightened up in the last few days, and you know I’ve expressed my dissatisfaction with the way the campaign to defend HERO was run.  I’ve been concerned about the failure to utterly crush the bathroom lie.and its lack of outreach to the Houston Black community and POC trans community of color in the face of an opposition side that will use fear and smear attacks on trans people as their only tactic.

And the HERO haters have been immensely helped by the lazy reporting of Fox 26,

You have until 7 PM to take advantage of early voting, otherwise you’ll have to wait until November 3 to make your voice heard on this issue.

1 thought on “The Fight To Keep HERO-October 30”