While Pauline Ngarmpring failed in her bid to become Thailand’s prime minister, it was still a historic election night in the Land of Smiles.

Filmmaker Tanwarin Sukkhapisit on March 24 became the first genderqueer person elected as an MP in the Thai House of Representatives. LGBT Thai’s make up 13% of the electorate in the country.

Sukkhapisit was initially announced in many media outlets as trans,  but in a subsequent interview made it clear they identified as genderqueer and used they-them pronouns

They ran as a candidate with the Future Forward Party, which is projected to become the third largest party in the Thai government after all the ballot are counted. 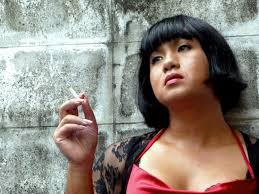 If their name sounds familiar, it’s because they just fought a successful five year legal battle to get their film  Insects In The Backyard on the Thai silver screens after it was censored and accused of moral indecency.  Once an agreement to cut a three second nude scene of struck, the film was allowed to be shown.

After that negative experience fighting film censorship, Sukkahpisit decided to run for office with the Future First Party, and said that the desire to fight for TBLGQ rights in their nation drove them to run for public office.

Tanwarin has been discussing political themes in their movies for over 20 years, and now feels it’s time to establish new laws that address the changing mores in Thai society, starting with changes to Section 1448 of the Civil and Commercial Code to allow marriage equality

We’ll see what happens as Sukkhapist begins their new role as an MP.  It will also be interesting to see is a Thai trans person finally breaks through and gets elected to the Thai House of Representatives .