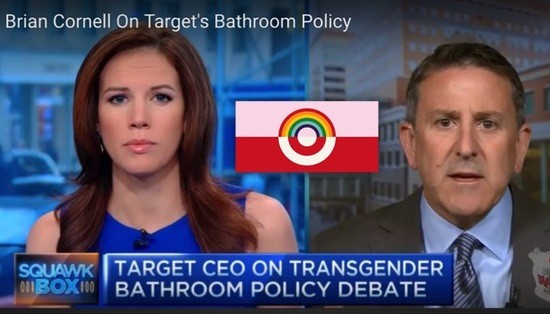 As Dr. King once said,  the ultimate measure of a man is not where he stands in moments of convenience and comfort, but where he sands in times of conflict and controversy

Corporations and their leaders can also be judged by that same standard, and so far Target is passing with flying colors in standing with the trans community.

Since the unjust HB 2 passed in North Carolina and Republican controlled legislatures started proposing bills to oppress trans people, Target has been standing firm on its policy for employees and shoppers that you use the restroom in its stores based on your gender presentation.

When questioned about it in a CNBC Squawk Box interview in the face of threats from the American Fascist Family Association of a boycott, Target CEO Brian Cornell stood with our community

The AFA boycott they launched back in April has failed, but the professional TBLGQ community haters have made renewed calls to boycott Target and other companiesduring this holiday season.

We trans peeps need to be there in support of a company that supports us.   So whenever possible, spend your holiday T-bills with a company that respects your humanity.   Show corporate America that supporting trans people is good for their fiscal bottom line

Target stands with the trans community.  Let’s stand with them this holiday season.