I spent almost nine years living in Louisville and visited it a few times before it become home during the 2Ks.

So when I moved back to Texas, while I was coming back to be with my blood family and friends that date back to childhood here, at the same time the friendships I had built up and nurtured during my time in the area were now about to get tested by the 1000 miles that would separate me from their everyday lives.

There are times when just watching a UK or U of L game or the Derby triggers some memories about some event I attended there or stuff that me, Dawn, Polar or others were involved with.

I can’t ever hear about or watch a fencing match these days without thinking about the wonderful people at the Kentucky Division, Louisville FC, Bluegrass FC, Knight of Swords, the ‘Baby Vets’ or the ‘Senior Mamas’.

I think about Rev. Sally McClain and the wonderful people at Edenside, who were some of the first people I encountered in the days immediately after I moved there and I was depressed about leaving Houston.  .

I think about local journalist Angie Fenton, who I met while she was compiling an article on transpeople in the area and a friendship developed as a result of it.

I think about the people at the Fairness Campaign, the Kentucky rainbow community and the Louisville liberal-progressive community I helped fight the powers that be with and advance the cause of human rights for all.

I also think about the folks when it’s time for the University of Louisville’s  on campus pride celebration during the fall semester or TDOR like Brian Buford and Dr. Kaila Story

And speaking of TDOR, this post wouldn’t be complete without me talking about the Louisville Presbyterian Theological Seminary, the lead sponsors of the events there and the wonderful people on that campus..

Even my former neighbors cross my mind at various intervals.  I’m also thinking about the people who were in my sistahcircle in Da Ville as well like my homegirl Shaha that I miss talking to or dialing up for advice or chatting with on a regular basis.. 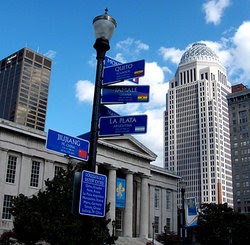 While various events trigger those trips up I-65 memory lane at times, nothing does it to me more than the holiday season.

So what triggered this post?  Bardstown Aglow was last night, and I was a little down about that until I got called by Dawn and hit up for chats on my FB page by Aletha Fields.   Felt good to talk to both of them.

It also felt good to know I was still missed 18 months later by most the people whose lives I came in contact with and impacted on what I hope they perceived as a positive manner on one level or another while I lived there.