It’s been almost a week since the Olympic flame was extinguished at the Maracana Stadium on Sunday to close out the Rio Olympic Games and literally pass the hosting torch to Tokyo for 2020. 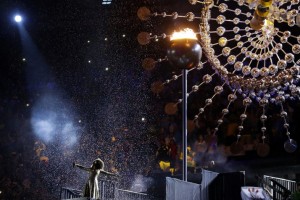 After 19 days of competition in which we won so much that Donald Trump couldn’t even muster a single tweet congratulating our diverse USA Olympic team for winning 121 medals to lead all nations, I was suffering from an acute case of Olympic withdrawal on Monday and Tuesday.

It started with that twinge of sadness I felt when I watched the moving images of the Olympic flame be extinguished as Brazilian singer Marlene de Castro sang a hauntingly beautiful song with misting water flowing in the background as the wind powered sculpture designed by Anthony Howe that made for a cool effect in contrast with the Olympic cauldron stopped moving at the same moment the flame went out.

The next morning, the cold reality the Games were over hit me as I tuned on the TV, and instead of eagerly watching the athletes of the world competing for gold, silver and bronze medals, I was back to the real world of a contentious US presidential election and the news rudely reminding me that my community’s human rights were under a legal attack unfortunately led by my indicted Texas GOP AG Ken Paxton. Today is also Friday, and that means it’s time to call out the fool, fools or groups of fools who have uttered Olympic sized baldfaced lies, made WTF statements, and exhibited brazen hypocrisy.

Yep, it’s time for this week’s version of the TransGriot Shut Up Fool Awards

Honorable mention number one is a group award for every conservative pundit this week trying to cosign Donald Trump’s ridiculous claim that Hillary Clinton is a bigot.

Thanks to all the Black and Latinx media pundits that had no problem calling out the idiocy like Angela Rye and Charles Blow.

I have a lifetime of experience spotting bigots along with every non-white American, and we can pretty much unanimously say that’s it’s hypocritical and WTF worthy for Donald Trump’s bigoted and racist behind to be accusing someone else who has the long positive civil rights track record Clinton has of bigotry

Hey, if he did, he’s only telling the truth about you, so why are you getting so pissed off about it?

Honorable mention number four we go across The Pond to Nice, France, where the Nice po-po’s are gleefully oppressing Muslim women by enforcing their burkini ban that has now gone to the French courts to challenge its .

Honorable mention number five is Sigourney Coyle, who exhibited an acute case of faith -based transphobia when she claimed thatshe would fail gym class if she was ‘forced’ to dress out in front of a trans feminine student

Yeah right.  That trans feminine student is more concerned about being treated with dignity and respect than worrying about what you look like in your underwear when you change into your gyn clothes.

And you’re proving the old political science joke about Pennsylvania to be true in your case.   It’s Pittsburgh in the west, Philadelphia in the east, and Alabama in the middle.

Honorable mention number six is Atlanta based megachurch pastor Creflo Dollar, who is in the news for his latest effortin faith based prosperity gospel coonery by claiming ‘God told me to endorse Donald Trump ‘

And y’all wanna know why I can’t stand these sellout ‘minsters’ like Dollar that are nothing more than Rev, Ike on steroids.

Honorable mention number seven  goes to GOP federal Judge Reed O’Connor for oppressing trans people across the USA just before the first day of school started with his unjust injunction. .

The POTUS picks not only the SCOTUS, but the federal judge you’ll be depending on to rule in your favor in any federal discrimination cases you file. This trans oppressor not only filed suit to fight the DOE/DOJ Dear Colleague letter that simply states you cannot discriminate against trans students and they are covered under Title IX,, the same day he accepted a dinner invitation from Amber Briggle and her transgender child, he filed another federal lawsuit to deny transgender people medical coverage.  .

As I’ve said repeatedly, love my home state of Texas, hate the GOP conservative azzholes and trans oppressors who run it