The Republicans held their Klan meeting convention in Cleveland this week to formally nominate Donald J. Trump as their 2016 presidential nominee.

All I have to say about that train wreck of a political convention is to borrow the eloquent words of the late Maya Angelou.  “When somebody shows you who they are the first time, believe them.” 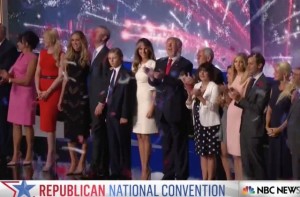 Yes, the Republicans showed us who aren’t members who they are as a party   From their overwhelmingly white convention hall, facts free podium speeches, gleeful engagement in WTF levels misogyny, racism, homophobia and transphobia, their reprehensible 2016 platform, jacking the words of a First Lady they hate, and the Triumph of the Trump.
And for once my Texas GOP politicians weren’t the ones leading the charge on the rampant GOP ignorance on display.

The #RNCinCLE will go down in political infamy and hope on November 8 they will be crying in their ballrooms as the media announces another historic American election first.

That’s a nice segue to getting to our usual Friday TransGriot business of pointing out what fool, fools or group of fools took greater steps toward becoming infamous in their own right.  So let’s get busy calling them out.

Honorable mention number one is conservative talk show host Laura Ingraham, for her Nazi salute after the conclusion of her remarks.  Yeah, we in reality based America were paying attention.

Honorable mention number two is ‘Pastor’ Mark  Burns for his hateful benedictionexalting Conservagod and the Republican Party that Uncle Ruckus would have been proud of.

Honorable mention number three is Ben Carson for letting loose with the transphobiaagain.   Me and my unapologetic Black trans siblings find you and other kneegrow Republicans to be ‘absurd’ as well.   There are more than 1.4 million trans people here in the US, deal with it.

Honorable mention number four is Rep. Steve King (R-IA) forhis racist MSNBC interview.  And yes Steve,non-whites have created many of inventions, created the music, and countless other innovations that benefit society as a whole.,

Honorable mention number five is the Trumpenfuhrer, Donald Trump, for pick a RNC convention moment.   The cavalcade of lies in his far too long acceptance speech, the lies he told this week, the attacks on Ted Cruz and John Kasich, the creepy feeling up his daughter on stage and the orange tanned arrogance.

And we still have four more months left until this election is mercifully over.

Honorable mention number six is NC Governor Pat McCrory (R), who continues to be in denial that it’s his and the NC GOP’s fault their state is hemorrhaging jobs and events because of HB2 and is trying (and failing) to blame everyone,

The NBA became the latest entity to remove an event from the state because of the unjust HB2 law by pulling the 2017 NBA All Star Game from Charlotte.

Please NC, remove Pat McCrory from your governor’s mansion along with the GOP majority that blitzed this madness through the legislature in November.

This week’s Shut Up Fool winner is Milo Yiannopoulos, the gay conservative Breitbart tech editor who found himself getting a permanent Twitter ban for racistly attacking and promoting abuse of actress Leslie Jones to the point she briefly left Twitter

Jones is one of the stars in the all-female remake of Ghostbusters, which raked in $46 million in its opening weekend despite the cries of the movie bros hatin’ on the remake

Yiannopoulos has proven in this ugly episode that elements of the conservative white gay male community can be just as reprehensibly racist as their straight conservative male counterparts.