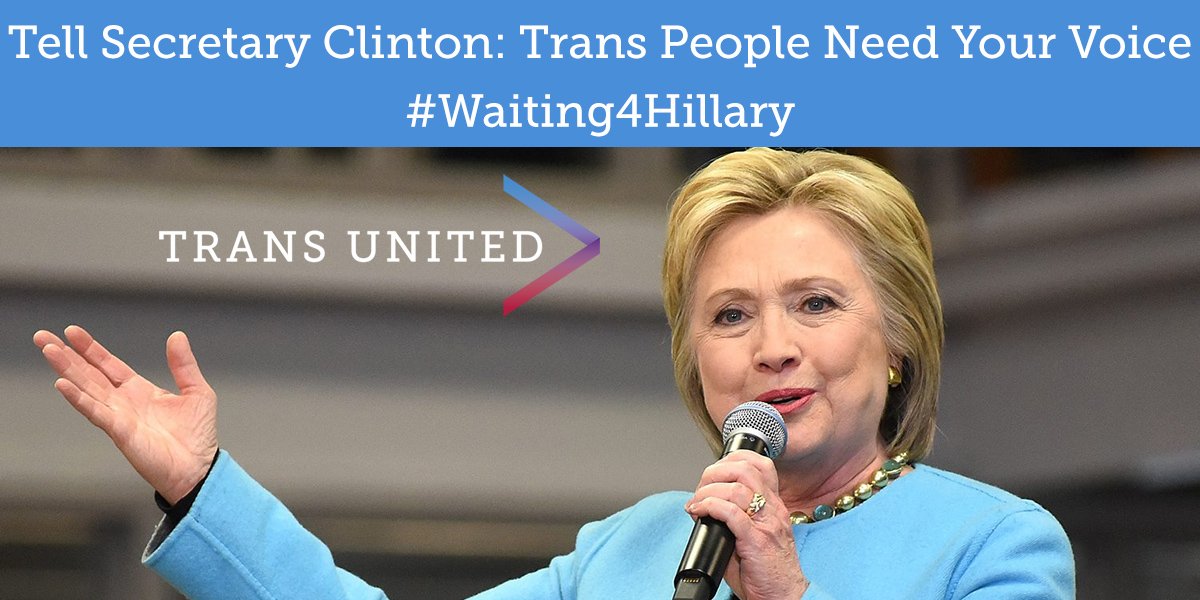 Back in February I wrote a post in which I proudly stood up and endorsed Sec. Hillary Clinton for presidentin advance of the March 1 Texas presidential primary.

I did so because I believed and still believe that she is the best qualified person left in the running for the most important office in our country.   It is also because of some actions done for trans people while she was Secretary of State in terms of the June 2010 policy change that allows trans people to get US passports with a correct gender marker and without genital surgery.   I also believed she would be the best person left in the race to continue President Obama’s legacy as the best president ever when it comes to trans rights issues. I took a lot of intense criticism from Sanders supporters for that endorsement, but  as a longtime trans community leader, I’m not afraid to make unpopular calls when they are in the best interests of my community.

The wisdom of that endorsement was validated as she overwhelmingly won Texas, swept the South and other diverse states in our country and garnered over 11 million votes of Democrats while doing so.

.I’d like to point out, as you probably aware of because of the Trans United For Hillary group and this section of your campaign website, that some of those 11 million people who proudly voted for you are transgender Americans.

Secretary Clinton is on the verge of making history as the first female candidate to clinch the Democratic nomination and become a major party candidate for president, and I congratulate her and the campaign staff for that historic accomplishment.

But what I am concerned about is why her campaign, as it shifts to what is certain to be a hard fought fall campaign against Donald Trump (ewwh), has been reluctant to fill out the Trans United Fund survey as the Sanders campaign did. . We know why Donald Trump won’t do so

We are in a moment in which the Republican Party, fundamentalists, conservative organizations and even the Ku Klux Klan are making it clear for various reasons they oppose civil rights for trans people, and are gleefully attacking transgender people’s humanity as they do so.

It is also the time in American history in which a diverse group of trans Americans have visibility at levels we haven’t seen since Christine Jorgensen stepped off the plane at JFK from Denmark in February 1953.

This is a time of heightened interest and support for trans people, and I appreciate the fact the Secretary has mentioned transgender Americans in some of her stump speeches.  But what we need to know as we approach a high stakes election in November is will Secretary Clinton’s deeds for trans Americans match or exceed her words? That’s why Trans United Fund sent that survey, because we need an honest answer to that question that we can tell our trans constituency we are charged with representing on the national political stage.

We trans people of color also need to know that answer, because the quality of our lives for the next four years literally hangs on whether you or Donald Trump succeed the best president ever on trans issues on January 20.

As a unapologetically Black trans person who lives in Texas, The TUF survey is information I and others will consider vital when it is time for us to ponder who to vote for in the remaining primaries and the fall election.   Since this survey was put together by a diverse group of trans people, it will help us determine where you stand on a broad range of issues that affect our diverse trans community.

I live in a Republican run Texas that seems to be hellbent in becoming the undisputed champion of peddling anti-trans hatred.  Our GOP dominated legislature being out of session until January is probably the only thing that kept them from following North Carolina down the foolish path of enacting unjust HB2 style legislation that will ruin my home state’s economy. I and my trans siblings need to unequivocally know that a President Hillary Clinton will have my back, especially since I’m painfully aware that my GOP governor, lieutenant governor, my US senators and attorney general have made it clear they won’t.  I need to know Secretary Clinton, that should you become the next president of the United States, that you will be a drum majorette for justice.

And we need to know via the Trans United Fund survey, what you will do to protect and defend those human rights..