If I haven’t said it lately, I have much love and respect for Ashlee Marie Preston, my trailblazing Left Coast based sis who made history on June 28by being tapped as an out Black trans woman to be the editor in chief of Wear Your Voice.

Since that announcement, she has been busy running Wear You Voice in addition to calling out Charlamagne Tha God about Lil Duval’s transphobic Breakfast Club comments

This weekend she put Caitlyn Jenner’s problematic behind on blast, and in the wake of this I heard elements of White trans feminine world criticizing Preston on social media for doing so. 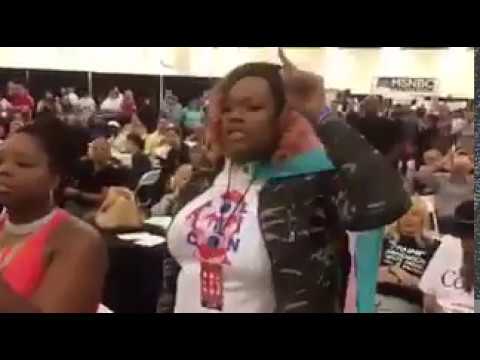 If Ashlee was calling out some TERF, right wing anti-trans politician, Black fundie pastor or assorted transphobic gay men like Milo, the peeps criticizing her now would be saying, ‘Yay Ashlee!”

But since it’s Caitlyn’s behind that was being chewed on by a Black trans woman , y’all wanna trip.

I need y’all to chill with the tone policing and think long and hard about the inconvenient fact that some of y’all in White Trans World aren’t happy with Jenner’s long list of gaffes and WTF level comments as a trans Republican either, especially since she’s a trans woman with your ethnic heritage. .

If you’re wondering where I stand on this issue, it’s with Ashlee.   I and others in Black Trans World saw the video of what happened post LA Trans Chorus event as a needed and necessary dragging.

And before y’all go there, my support of Ms. Preston is not because I’ve had my own issues with the WTF level commentary Jenner has uttered since coming out.

My support of Preston in this case is rooted in the understanding that as someone who has been a Black trans leader for nearly 20 years, she is role modeling the tenets of Black leadership as outlined by the late University of Maryland political scientist Dr. Ron Walters.

Dr. Walters defined the task of Black leadership as providing the vision, resources, tactics, and strategies that facilitate the achievement of the objectives of Black people.

Those goals according to Walters are freedom, integration, equality, liberation, or defined in the terms of specific public policies. It is a role that often requires and results in you as a Black leader disturbing the peace when you speak truth to power.

It also makes some people uncomfortable and causes controversy at times as well.

And as Black trans leaders, we not only have those Black leadership principles set forth by Dr. Walters to uphold, but some that are specific to us as Black trans people if we are going to properly represent our community.

But the salient point I wish to bring up here is that as a Black trans leader, Preston is representing a different trans constituency in Black trans people who at times have issues and objectives that don’t always neatly line up with or may be opposed to what peeps in White Trans World think or want.

When placed in those situations, we as Black trans leaders are compelled to call out situations that occur when what some of you want and support in White Trans World (like a Trump presidency) is harmful to our Black trans community.

Pro tip: Full throated support of Dolt 45 and his white supremacist administration by you as a white trans person is one of those issues that will get your wig snatched by me and every Black trans leader that’s paying attention.

We will not give a rat’s anus when we call your azz on it because we are repping our community. You can be mad and stay mad about us calling you out for supporting an administration that has declared war on transgender people.  Those anti-trans policies will have a disproportionate negative effect on the Black trans people we represent and other trans people of color.

So right on Ashlee!   Keep speaking truth to power, pointing out crap, and calling out injustice aimed at our community by friend, foe and frenemy.

And looking forward to the day I get to finally meet you in person.