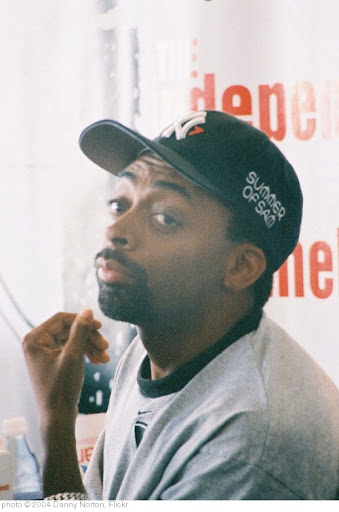 Guest Post by Renee, the talented and thoughtful editor of Womanist Musings.

At the Sundance film festival, Spike recently premiered his independent movie, Red Hook Summer.
Spike has had several problems over the years getting funding for his
films, and I firmly believe that at least part of the issue, is Spike’s
commitment to telling our stories without the coonery that is featured
in the typical Tyler Perry film.  To be clear, Spike’s male privilege
has at times made some of his work problematic and in fact, other than She’s Gotta Have It, strong female roles have been few and far between. Even She’s Gotta Have It, includes a rape as punishment for failing to agree to a monogamous relationship.

The reviewsfor Red Hook Summer
have been decidedly bad. I have not seen the movie, so I cannot argue
any faults or biases the reviews may contain.  In the question and
answer period, Spike Lee and Chris Rock had a verbal scuffle.

Rock, who appeared to be joking around, said,
“You spent your own money … What would you have done differently if
you’d actually gotten studio money? What else would have happened? Would
you have blown up some (bleep)?”

Lee, apparently unamused, responded, “We never went to the studios with
this film. I bought a camera and said we’re gonna do this
mother(bleeping) film ourselves. I didn’t need a mother(bleeping) studio
telling me something about Red Hook! They know nothing about black
people! Nothing!” Lee then added, “And they’re gonna give me notes about
what a 13-year-old black boy and girl do in Red Hook? (Bleep) no!” [Source]

I
have to agree with Spike when he points out that no White studio head
has the slightest clue of what it to be a 13-year-old Black boy and
girl.  This is especially true if we consider the class aspect that the
movie seeks to interrogate.  These White men of class privilege are only
interested in the bottom line, and not about depicting the true
experiences of kids of colour, or even why such movies are desperately
needed.

A negative reaction has become common place to much of what Spike says
or does. The following are some comments on the discussion between Spike
and Chris Rock.

Bluelife4: I like Chris Rock. He pokes fun at any race. But Spike Lee? He’s a racist.

Wallace:  Spike Lee is one of
the biggest racist I have ever seen. Man I’m tired of his low budget
films. Enough already. Yes I am a black man. Racism from any person is
wrong. I think this guy sucks. I’m a middle class worker who live one
of the most racist states in the US (S.C.) and to hear this guy speak
is crazy. Man grow up. Please. I think his anger comes from his height.
Blame ur parents not the world.

Nicolas:  Spike Lee is an angry,
racist little bigot. Always has been. No such thing as “reverse
racism”. The whole idea that you can say racist things about your own
race is laughable. Racism is racism, black, white, yellow, brown, red,
blue, etc….

The Love Doctor: I’ve been
wondering for more than 20 years, when are we going to start saying
that being racist towards white people is wrong too????

I was always taught that racism is wrong period. But it seems in our
modern culture, discriminating against and being racist towards white
people seems to be accepted in our culture…

Duntov: Seems like an Angry
African-American that continues to prey on racism for his own gain and
agenda. Go away until you can talk like an intelligent human. Stop
the hate and move on.

Jack Plummer:Why is it okay for a black person to be a racist?

Hustonman:  On the Yahoo
homepage it said Spike Lee went on a surprising tirade. Who is
surprised? This agitator has had one tirade after another for twenty
plus years. No class, no truth, just a little disgruntled man. A racist
with a Napoleon complex.

These comments all appeared on the
first page of the article, and as you might imagine, they continue in
the same vein no matter how deeply into the article you go. Spike speaks
without apology about race and racism in the U.S., and this makes
people uncomfortable.  Many either have bought into the bullshit idea
that the world is now colourblind, or they very firmly believe that
their thoughts, or actions, are not part of the problem — and this
includes the sell out negro — who made sure to announce that he is
Black.

Whiteness may not like to admit it, but Blacks of the African diaspora
are entitled to our continued rage, and the very suggestion that we
should moderate our speech to suit their comfort level is only an
indicator of how far we still have to go, rather than the
unreasonableness of our position.  Spike Lee is not a perfect man, but
he is most certainly not a racist.  No Black person speaking out against
White supremacy will ever be a racist.

These commenters are not the first to refer to Spike Lee as racist for
his approach to race and film, and they most certainly will not be the
last. Whiteness would very much love the definition of racism to be
prejudicial thoughts, acts, or language against another race.  It’s a
nice and simple definition, which allows Whiteness to be able to claim
to be oppressed by people of colour.   It allows Whiteness to be able to
circumvent our rage, and once again center themselves in the
conversation.  Most importantly, it allows Whiteness to deny and
alternately censure our speech on the alleged grounds that we are all
equal. This is why the co-option of the term racist, is an absolute
disservice to people of colour.  It’s ahistorical, in that it ignores
the ongoing inequality in power relations between Black and White.  When
a White person acts, ze does so with the full institutional weight of
Whiteness at their behest. An analysis of race without an
acknowledgement of power is an incomplete and faulty analysis.  This is
specifically why it is necessary to understand and accept that racism
equals privilege plus power.  No matter how angry, or hate filled a
person of colour may be, they do not exist with the institutional power
to act on their feelings. For all of the class privilege that Spike Lee
has managed to amass over the years, the fact remains that he still a
Black man in America and that makes him an oppressed person.

Spike’s status as a racially oppressed Black man means that his speech
is not welcome, and that is particularly so when he is confronting
racism.  While I may not agree with everything that he says and does,
there can no be denial that he continues to be relevant.  He has forged
ahead to make movies that White run studios have not seen as important,
and it is because of this struggle that he is so derided.  When he spoke
of being tired of yet another White WWII war movie,
Clint Eastwood’s response was to tell Spike to “shut his face”.  If you
cannot acknowledge that Black blood was shed in the battle fields of
WWII, only to come home to Jim Crow, then you fail to see the truth.
When he spoke about the coonery and buffonery engaged in by Tyler Perry,
Mr. Perry was affronted.  He was happy to ignore the tradition in which
his movies were made and the negative effect that they have had on
Blacks.

There are certainly many criticism that can and should be levied at
Spike Lee, but being a racist is not now or ever will be a legitimate
charge.  The truth of the matter is that Whiteness loves to engage in
revisionist history, and at times it is supported by Blacks, but finding
even hundreds or thousands of Blacks to agree to their own continued
colonization and oppression does not make the truth less true, or any
less relevant.  Truth tellers are never embraced in their lifetimes and
as Dr. King has shown us through his life and death, in the end, until
their speech can be used to bolster the oppressor they are relegated to
being understood as angry, disgruntled and hateful.  By this statement I
am not saying that Spike Lee is the equivalent of Dr. King, only that
truth when told without embellishment, to favor the ruling class will
always be unwelcome.