The latest racist incidentinvolving white younglings on a college campus is more evidence pointing to the fallacy of thought that racism will end when the Greatest Generation and the Baby Boomers die off.

Umm no.   To me, the chatter to ‘wait until the old racists die’ is an excuse for people to do nothing to aggressively attack and eradicate the problem of racism in our society.

And once again for the people in the back, everybody can’t be racist.   Everybody can be bigoted and prejudiced

What that statement fails to take into account is that racist parents will attempt to pass on their racist commentary and belief systems to their kids.  Racist relatives will do the same thing.

Some of those kids targeted will reject it, while others will embrace it and pass it on to their kids, nieces and nephews.  If they are successful in doing so, that keeps it going for another generation or two.

And please spare me the kissing cousin to this flawed thinking that if ‘you people didn’t talk about racism, it would go away’ comment.  Me and other non-white people talking about the negative ways in which racism affects our lives is not ‘perpetuating racism’, it’s diagnosing the problem.

You can’t eradicate a problem until you discuss the scope of it and what you need to do to successfully fix it.   That’s why we non-white peeps talk about it on a regular basis to remind you peeps who o through your lives without being affected by it that it exists, the problems, micro and macroaggressions we deal with are real, and that racism is simply not going to magically end by ignoring it or doing nothing about it. 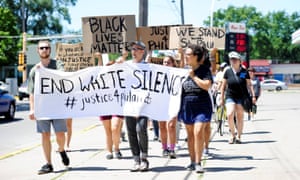 If you want to erase racism in this society, it is going to take some heavy lifting to do, with the vast majority of the work needing to happen to make racism a thing of the past occurring with our white siblings.

Racism is not going to die off.  The only way it will be eliminated in our society by sustained ongoing anti-racist action.