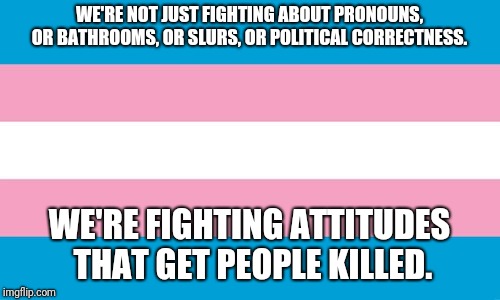 When I talk about the trans panic defense, it is a shock to judges and even attorneys who have been practicing law for decades.

So what is the trans panic defense?   It is a reprhensible legal strategy used by defense attorneys working for clients who have killed trans or gender non conforming (GNC) people.  It asks juries to find that the victim’s gender identity or secual orientation is to blame for the defendant’s loss of self control and violent reaction that led said defendant to harm or kill that trans or GNC person.

Yeah, it’s BS, but since the trans panic defese plays upon transphobic ‘deception’ meme and taps into the transphobia that may be present in a jury, it unfortunately works.

We saw it being deployed by Dallas defense attorney Andrew Wilkerson in Dallas last October to get his client Edward Thomas off on a lesser charge.   Thomas was the person who viciously beat down Muhlaysia Booker in a videotaped fight last April.

Thomas was convicted on a misdemeanor asault charge instead of the felony aggravated assault with a deadly weapon one.

But it exists, and there is now a movement to ban it.

There is a US Senate bill, S 1721, that has been filed to ban the trans and gay panic defense on a federal level.   The American Bar Association (ABA) and the LGBT Bar Association supports its elimination.

The one in Washington state is called the Nikki Kuhnhausen Act in memory of the trans teen who was murdered there, and is now being debated by their state legislature,

It will interesting to see if more states join the movement to ban the trans panic defense.  It’s something that should have been done a long time ago.