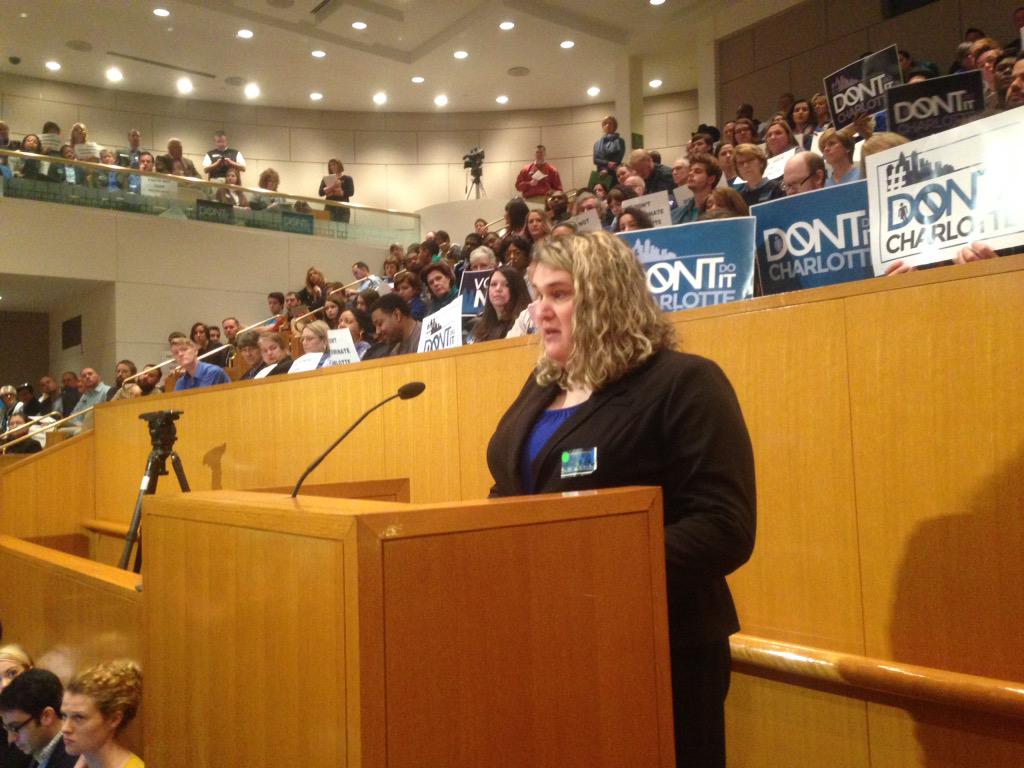 Of course I’m pissed about it along with trans folks in Charlotte and North Carolina who don’t trust the NC GOP to follow through on their end of it.   But what has them even more incensed is that they weren’t consulted, and are livid that the Charlotte City Council would take this step without consulting them.

Local trans leader Paige Dula composed an open letter to the Charlotte City Council that expresses the feeling of trans folks in the Queen City, and I’m posting it as a guest op-ed because the voices of the local trans community needed to be signal boosted.

As a member of the local LGBTQ community I must say I was totally taken aback by the sudden repeal of Charlotte’s NDO on the condition of the NCGA lifting HB2. I have been personally contacted by a couple of you privately and I appreciate you reaching out as you have. But I have to ask why didn’t you reach out to our community sooner to discuss this course of action? We worked together very hard over several years to make the NDO happen. So many people in the local LGBT community have a LOT of skin in that game. It’s not safe or easy to be out as a transgender woman but I and a few others did so the past couple years to put a face to why the protections are important. We sacrificed our personal safety and privacy for the betterment of our whole LGBT community. In one meeting you rendered that as worthless. I understand the state and Charlotte in particular is really taking on the chin financially in the wake of HB2 and the boycotts. But why give in NOW? Why when you said you wouldn’t in September?

I’ve been assured that in the future Charlotte will pass another NDO, once Roy Cooper is in office. The problem is the NCGA still has a Republican super majority that will just be able to do a repeat of HB2. That is, unless Charlotte passes an NDO the NCGA finds palatable. That would entail stripping transgender protections in the public accommodations area. That would be unacceptable as that is the area where transgender people experience the most harassment and discrimination.

The other option would be to hope the redistricting and subsequent re-election of the NCGA next year results in there no longer being a republican super majority and a fully inclusive NDO could go in and stand unchallenged at least as long as we have a Democratic governor. In that case we have at minimum a year before a new ordinance can go in. And let me tell you that at least for the Trans community the incidences of harassment have done nothing but increase thanks to HB2 and the Trump campaign. Bigots feel emboldened now and we need protection now more than ever. Next year transgender people are likely to lose a ton of protections that Obama put in place for us: Affordable Care Act requiring medical treatment for Trans patients… GONE, Title IX protections for Trans students… GONE, DOJ case against HB2… GONE, transgender people serving openly in the military… GONE.

So pardon me if I don’t have a lot of trust that you all are doing what is best for me, my community, Charlotte, and NC. What good is a government who doesn’t stand beside the least of their constituents? We fought hard to make sure you were elected because we were assured you had our backs. All I see now is your back turned against us.