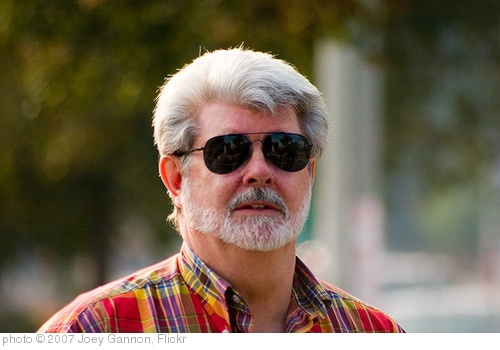 Guest post from Renee of Womanist Musings, who is all that and four bags of ketchup flavored potato chips.

For
people of colour, a trip to the cinema usually means paying our hard
earned money to see a film with few Black actors that reflects a White
perspective.  As much as I despise Tyler Perry, his films are some of
the few in which can be certain to see an all Black cast.  Movies that
star marginalized people, and tell our history are notoriously difficult
to fund, because there is the belief that Black films aren’t
marketable. Even for the amazingly brilliant Malcolm X, directed
by Spike Lee, Lee had to depend on support from Black celebrities to
bring the film to market. If said movie attempts to tell the history of a
marginalized community, one can be certain that a White protagonist
will be found to frame the story around eg., Dances with Wolves, Amistad, Ghosts of Mississippi etc,.

George Lucas appeared on The Daily Show to discuss the difficulty he had getting funding for Red Tails which stars Cubing Gooding Jr., and Terrence Howard
Baby Wipes, and is directed by Anthony Hemingway.  It is a large budget
movie, with an all Black cast, directed by a Black director, about the Tuskegee Airmen.  Though a film has already been produced about the Tuskegee Airmen, one movie cannot possibly encapsulate what the bravery they displayed in the face open hatred and a brutal war.

Like all things Black, the journey to the big screen has not been an
easy path. “It’s because it’s an all-black movie. There’s no major white
roles in it at all…I showed it to all of them and they said no. We
don’t know how to market a movie like this,” Lucas said.

While I appreciate Lucas’ efforts to bring this movie to the big screen,
the sense of White saviour that he displayed in an article published by
USA Today is troubling.

“I realize that by accident I’ve now put the black film community at risk (with Red Tails,
whose $58 million budget far exceeds typical all-black productions).
I’m saying, if this doesn’t work, there’s a good chance you’ll stay
where you are for quite a while. It’ll be harder for you guys to break
out of that (lower-budget) mold. But if I can break through with this
movie, then hopefully there will be someone else out there saying let’s
make a prequel and sequel, and soon you have more Tyler Perrys out
there.” (source)

Is
that his plea for all Black folk to take their butts to the theater and
buy a ticket?  If we support this film, created through the generosity
of a White man, then it will left us on up out of the ghetto.  Black
cinema is completely dependent upon the success of this movie and we all
need to be aware, that hoping for the day when we use our own agency
and resources to correct an imbalance is unrealistic.

The idea that what we need is more Tyler Perry’s, tells me that Lucas
has no real understanding of the Black community.  Perry’s movies make
money because they are all about coonery and buffoonery and they
regularly present a genderized minstrel show,
which actively oppresses Black women, therefore; I fail to see how a
proliferation of these types of movies would be a good thing for Black
people.  We don’t simply need more Black films made, we need quality
Black movies made that accurately depict our lives, hopes and dreams.

Lucas may believe that he has the inside track on what Black people
want, because he has a Black wife, but he is still a White man.  Taking
on the White man’s burden is racist and paternalistic.  We don’t need to
be saved by a White man.  Lucas’ comments take away much of the joy
that I have in this production, because they diminish the hard work that
Black actors, directors and producers are currently engaged in to tell
our stories.

Black people have always fought hard for our own freedom and agency.  We
have never stood idly by while Whiteness assassinates our character and
diminishes our opportunities.  Nothing has ever been handed to us, and
the very idea that this movie represents a magnanimous gift from a White
man to not only lift us out of oppression, but save us as well is
nonsense. In the history of the world, no powerful group has ever
willingly handed over power to a group that it oppresses, and therefore
the suggestion that benevolent Whiteness will save us is beyond
ridiculous; it’s a lie that White people tell themselves to assuage
whatever faux guilt they may be feeling for their ongoing privilege.

Thanks for the movie George, but we have always made our own way in this
world and we will continue to do so, but here’s a cookie for your
troubles.