Ever since the story broke back in 2010 that the widow of fallen firefighter Thomas Araguz III was a girl like us, I’ve been following it as the mother and ex-wife of Araguz tried to use the odious Littleton v Prange case as a way to do a money grab and stick it to Nikki at the same time.

Unfortunately in their zeal to hate on her, the ripple effect consequences were that the ability of Texas trans people to get married in the Lone Star State and have it recognized by the state were placed in jeopardy and riding on the results of this high stakes Araguz vs Delgado case.

I say high stakes because no matter which way it went, it would either set a precedent that would advance the human rights of Texas trans people or set them back.

Along the way, I’ve gotten to know her after our first meeting back in August 2010, and have admired her for sticking up for herself and her human rights. 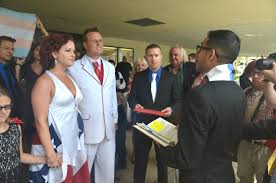 After six years, a court loss at the district court level, getting remarried and two legal wins at the appeals court and Texas Supreme Court level combined with the Obergefell SCOTUS marriage ruling that made the issues Delgado sued on moot,

On Friday the 13th Texas Court of Appeals affirmed their 2014 ruling that reversed the one invalidating her marriage of Judge Randy Clapp in Wharton and sent it with a mandate back to his court,

Now it’s just a matter of Nikki waiting for the final legal acts to play out in this long delayed and hard fought win for not only her, but all Texas trans people.