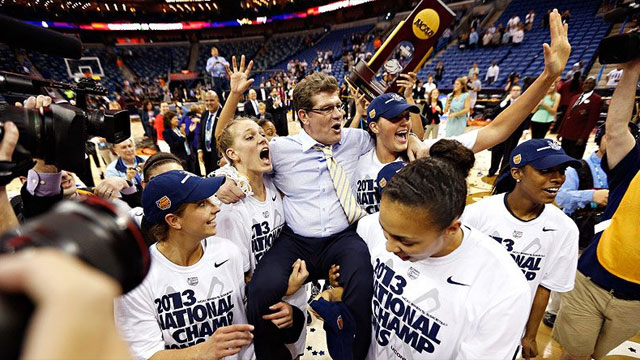 Since it’s Women’s History Month and I do have a lot of women’s sports fans who peruse this blog, ever since 2008 I have been posting on TransGriot an NCAA Women’s basketball tournament bracket in honor of it.

And frankly, the other reason I do so is to show the women NCAA ballers some love, too.

Last year I picked Baylor to repeat in what was Brittney Griner’s senior season but Shoni Schimmel and Louisville had other ideas.

My fellow Taurus (we share the same May 4 birthday) her little sis Jude and her Cardinal teammates merrily bombed away from the three point line and fearlessly drove the lane with attitude against my imposing Houston homegirl Griner as the Cards shocked the basketball world and escaped with an 82-81 upset victory that trashed my bracket and ended Baylor’s repeat bid.

The Cardinals rode the wave of that ginormous Sweet 16 upset and the subsequent takedown of number 2 seeded Tennessee all the way to the NCAA title game that UConn won 93-60 to capture their 8th NCAA women’s title.

Well, Shoni’s back for her senior season along with her little sis and Da Ville.  The Cardinals are not only motivated by that title game thumping, but like the menz are pissed off about their seeding.  They are also playing to get to their home arena the KFC Yum Center. 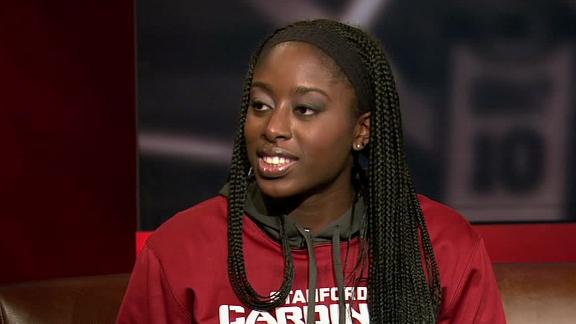 Defending champs UConn enter this tournament undefeated  (34-0) and the number one overall seed.  UConn is not only determined to repeat and win their 9th NCAA title, this Huskies team wants to join the others in UConn women’s b-ball history as the fifth to do so with a zero in the loss column.

Stanford has been an NCAA elite women’s basketball powerhouse.  They have made it to eleven Final Fours, were runners up in 2008 and 2010 but unlike UConn and Tennessee only have titles won in 1990 and 1992 to show for it.   My Houston homegirl Chiney Ogwumike wants to change that in her senior season and win a title for the Cardinal in the 21st Century.

The Cardinal also feel along with some women’s basketball media pundits they deserved a number one seed in this tournament.

Notre Dame is minus the graduated Skylar Diggins but are still dangerous as their undefeated 32-0 record proved.  The Irish lady ballers romped through their inaugural season in the ACC and also enter this tournament as a number one seed.

The Irish, like Louisville are trying to make it back to their home arena for the Elite Eight round   They not only want to make it to their third NCAA final in the last four years, but this time take the championship trophy home, especially if it’s at UConn’s expense.

The Irish have beaten UConn seven out of the last nine times they played them, but one of those two losses was to the Huskies in last year’s national semifinal game.

Dawn Staley has been quietly building South Carolina into a national power, and was rewarded with the regular season SEC women’s title. They were upset in the SEC women’s tournament but still earned a number one seed for their 27-4 season long body of work.

Will UConn, the current queens of the NCAA women’s hardwoods continue to reign and execute the repeat as an unbeaten squad?  Can the Irish make that trip down I-65 south to cap a perfect season by cutting down the nets in Music City?   Can Louisville also make that short trip down I-65, make it to the final again but this time send Shoni Schimmel out as an NCAA champion?

Or will another women’s team on the rise like South Carolina or on a roll like USC crash the Music City party?

We’ll see who will be cutting down the nets at Bridgestone Arena in Nashville April 8.