You long time readers know that I am a rail enthusiast, and one of the things I was happy to see was METRO build a rail component to our transit system that started construction with a 7.5 mile (12.1 km) segment that opened for service in January 2004.

The METRORail Red Line has been wildly successful, with ridership projections four years ahead of schedule.  After a successful  2003 referendum to expand the system to four lines, construction on the 5.3 mile (8.5 km) Red Line North Extension, the 3.3 mile (5.3 km) Green and (6.6 mile (10.6 km) Purple Lines began in 2009 with an original target date of 2012 completion for the Red Line extension and 2014 for the Green and Purple Lines. 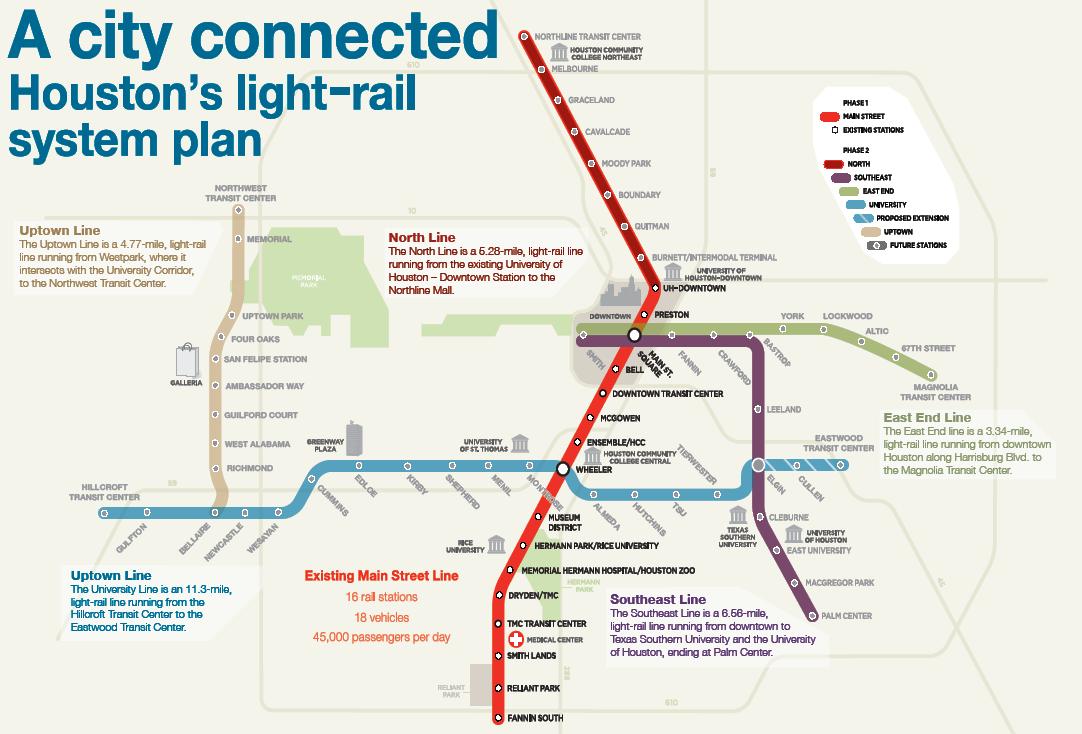 But while the North Extension opened early in December 2013, construction delays, rolling stock procurement issues, and other problems caused by non-METRO construction projects pushed the opening of the Green and Purple Lines back to 2014, and eventually to today’s opening date.

The Harrisburg bridge that will carry the Green Line over freight rail tracks and to the Magnolia Transit Center just broke ground in March and won’t be completed until 2016.

The Gold Line through the Galleria area is being built initially as a bus rapid transit lane which will be able to be easily converted to light rail service in the future.   That will allow it to be operational in 2017, while the needed east west University Line is on hold pending funding.

And just as was done when the North extention opened, rides on the rail system will be free all day.

The opening of the Green and Purple lines means that as of today, METRORail is not just one rail line, but a system spanning much of my hometown, with hopefully future expansion to Hobby and Intercontinental airports and the addition of a commuter rail component.

But until then, I’ll take advantage of my free rides that start up in a few hours..