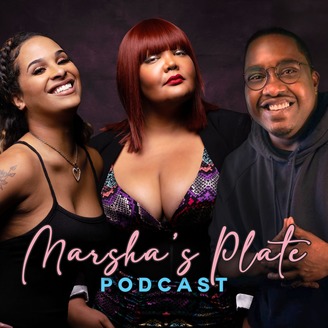 My multi-talented sis Diamond Stylz is a trailblazer in many areas of the media.   She was a YouTube video blogger for over a decade until they shadily deleted her channel.

When she was in high school, she was the plaintiff for a successful trans rights lawsuit, then became the first out trans student to attend Jackson State University.    Being in that somewhat hostile environment helped her hone her activist skills.  She’s also a singer and songwriter.

She recently wrote an articlethat was published in ESSENCE magazine, and for several years now she has a podcast called Marsha’s Plate that she hosts with Mia Mix and Zee that focuses on Black trans community issues, pop culture and other subjects.

I’ve had the honor of doing one of their shows since the podcast is based here in Houston, and hope I get the chance to do another one in the near future.

The big news is that Marsha’s Plate is now celebrating its 100th show, and it’s a must listen to one in which one of the topics they discussed is Andre Mizrahi’s jacked up transphobic rant.

Congratulations to the Marsha’s Plate team for hitting this milestone!