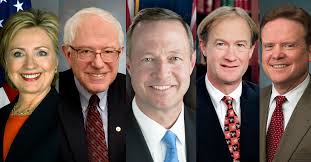 After suffering through the horror of multiple GOP presidential debates that had the feel of a reality TV show, finally the Democrats get in the game with the first of their six debates from Las Vegas being televised by CNN starting at 7:30 PM CDT with Anderson Cooper as the moderator.

Vice President Joe Biden won’t be there since he still hasn’t decided whether he will jump into this race, but Democratic primary front runner Hillary Clinton will be in the Wynn Las Vegas house along with Sen. Bernie Sanders, Martin O’Malley, Jim Webb, and Lincoln Chafee.

In addition to wondering when will VP Biden get in the game, there is still the desire in Democratic Party circles to see more than just the six DNC sanctioned debates that is being echoed by people such as House Minority Leader Nancy Pelosi and former DNC Chair Howard Dean..

The call for additional debates have led to protests in front of DNC headquarters in Washington DC and heckling of DNC chair Rep. Debbie Wasserman Schultz at a recent New Hampshire Democratic party event..

And frankly, I’d like to see more debates as well.

Until that happens, the political junkie in me will take the opportunity to watch this one presidential debate that I suspect will be far more substantive on policy than all the GOP ones combined.