I’m more than a little sick of people letting their inner transphobic bigot out and aiming transmisogynist comments at cis women for whatever jacked up reason.

Far too often they get aimed at Black women in positions of power like Serena Williams and First Lady Michelle Obama.   It’s even more odious and heightens my pissivity about it when the trans misogynist comments come from someone who is a member of the TBLGQ community

Last night, Landis Smithers the VP of Grindr, took to Twitter to make a comment about actress Kristen Wiig’s new short hairstyle and tweeted this: 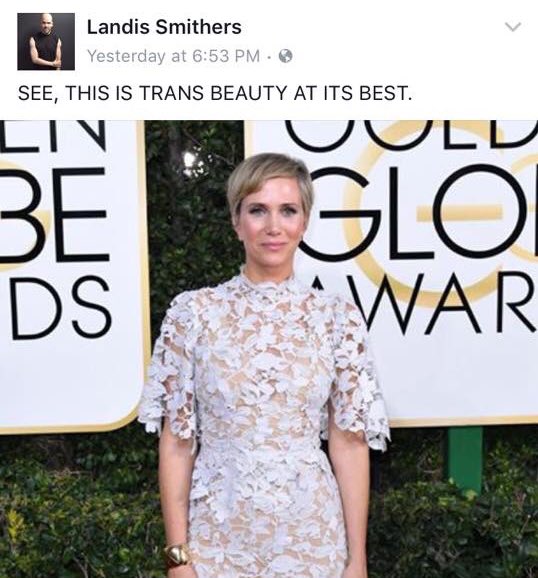 Well Landis, guess your ignorant behind wasn’t aware of it last night, but there were actual trans feminine beauties attending the Golden Globe Awards last night and slaying the red carpet in actresses Trace Lysette and Rain Valdez

Landis, this is why I have a major problem with your tweet.   At a time when the Republican Party, the conservative movement, right wing ‘christians’ , my home state of Texas and several others are openly attacking the humanity and human rights of trans people,  I’m beyond sick and tired of white gay men like you thinking that you can disparage trans women or aim trans misogynistic and shady comments at cisgender ones and arrogantly think you won’t get called out on it by us.

Trans women are women,even if your behind doesn’t get that simple point.  Some of us when we transition hit the genetic lottery and turned out gorgeous.  The long stylish line of trans models going back to the 60’s drives that point home. There’s also an ever growing list of trans actresses in Hollywood in addition to Rain and Trace like Alexandra Billings, Angelica Ross, Jen Richards, Laverne Cox, Mya Taylor, Amiyah Scott, Zackary Drucker and Jamie Clayton just to name a few of them who will be slaying red carpets and hopefully getting awards for their trailblazing work in the near future.

I also can’t forget Aleshia Brevard, who was blazing the Hollywood trail that many of these women are following

Trace and Rain are just two examples of the diverse beauty of trans women that exist not only in Hollywood, but across this country and the world.

And we trans women will continue being our fab selves slaying runways, red carpets, beauty pageants and just being our amazing selves in whatever setting we find ourselves in.