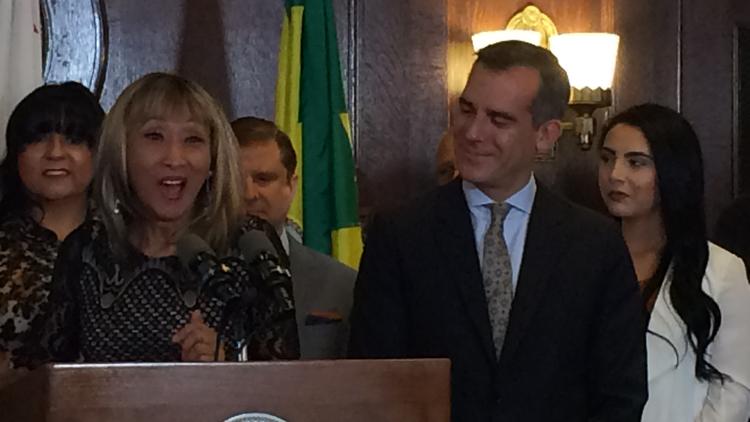 Was excited to hear that Los Angeles Mayor Eric Garcetti has announced this morning the formation of a Transgender Advisory Council in the City of Angels.  It is the largest city in the US to do so and only the second nationally  to create one after LA metro area neighbor West Hollywood, CA

“Today, the City of Los Angeles sends a clear message to transgender Angelenos:  your voices matter and your experiences count,” said Mayor Garcetti. “The nine members of our Transgender Advisory Council will bring a new and important perspective to City Hall that will help empower trans Angelenos to lead stigma-free, productive and meaningful lives”

The stated purpose of the TAC once it finishes setting up it basic formation, is to advise the city on how best to serve trans Angelenos and it work under the auspices of the Human Relations Commission to do precisely that.   Advisory Council member Karina Samala stated at the press conference that the TAC would focus on city hiring policies and anti-trans hate crimes.

The LA Transgender Advisory Council will advise the Office of the Mayor, the LA City Council, city departments and various elected officials on projects and policies that affect the Los Angeles trans community like economic development, public safety, accessibility, and public awareness of LA’s transgender citizens.

Congrats to Jazzmun Crayton, who was selected for the TAC from a blind application process based on criteria set by the Human Relations Commission and is one of the people I’ve had the pleasure of meeting at other national events.

Yo, H-town, can we form something similar to the TAC here?