While the public inauguration won’t happen until Monday, the Houston City Charter mandates that all elected offices start their terms on January 2.

So that means that our new mayor, controller and city council members were at a small City Hall ceremony today to take the oaths of office and officially be sworn in.

Sylvester Turner, after resigning from the state legislative seat yesterday he has held since 1988, took the oath of office to become our 62nd mayor. 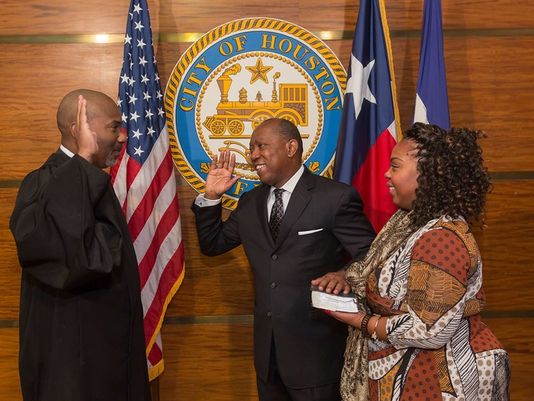 The public inauguration will take place at Jones Hall starting at 9:30 AM, and will be televised.  It’s free, and the Jones Hall box office opens at 8:15 to pass out tickets for the historic ceremony.

It was a long time coming for Mayor Turner and is well deserved.  It also keeps the streak alive of Houston mayor’s chair being occupied by a Democrat for the last 30 years, which is why the Tea Klux Klan was meddling in our mayoral election business.

Once again, thank you to the Fort Bend County portion of Houston for ensuring their plan failed and we got this man sitting in the horseshoe.

And oh yeah, looking forward to watching the inauguration to see if Ben Hall’s transphobic behind will show up..