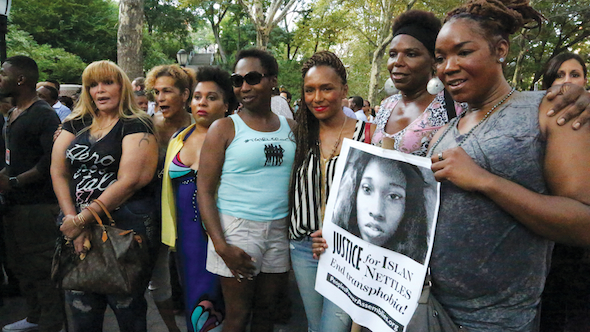 We are days away from seeing the end of a groundbreaking year for trans visibility predominately led by Black trans people.

In Houston it was myself, Dee Dee Watters and our supporters who showed up at the first City Council meeting of 2014 to send the message that the only acceptable Houston Equal Rights Ordinance to us would be a trans inclusive one, and we fought tooth and nail to make it a reality.

But one of the things I continue to be distressed by is the ignorance in our African-American ranks across the country about transgender lives, and the spreading of the debunked faith based ignorance about us being pimped by kneegrow sellout ministers trying to curry favor with white conservatives.

That crap needs to stop because it is greasing the skids to anti-trans violence aimed at Black trans women.  We lost 12 trans women in 2014 , and I don’t doubt the anti-trans hate being thrown around by the anti-civil rights haters hellbent on stopping human rights advances that include us played a large part in the fact these sisters are no longer in this plane of existence..

The Trans Rights struggle is also an international  human rights struggle that has been rooted in the African-American tradition since the Dewey’s Lunch Counter Sit In and Protest happened in Philadelphia nearly 50 years ago this coming April.

Just as our families include gay and lesbians in them, you also have transgender members as well who are part of the kente cloth fabric of Black society.   I defy any sellout kneegrow minister to tell me to my face I’m not Black.

I’m saying it loud, I’m Black trans and proud of being both, and you haters need to deal with that in the 2K15 and beyond.   We Black trans folks are going to demand our seats at the African-American family table, and we are not taking no for an answer any more.

We trans folks are proud Black people who care just as deeply about this community as you do, and it’s past time you got that message.

It’s also past time you heard another message concerning your trans brothers and trans sisters loud and clear, because it’s going to get repeated often by me, other Black trans leaders and our allies in 2015.

#BlackTransLivesMatter because they are also Black lives that matter.