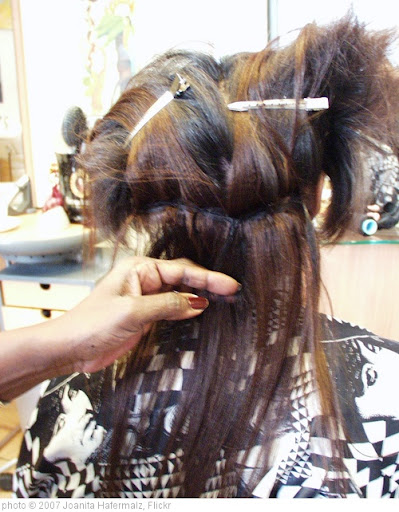 So as readers know, I have had natural hair for about 10 years now.
First I wore dread locks which hung almost to my behind.  After years of
wearing that I got tired and wanted a new look, so I did the big chop.
I knew without a doubt that I never ever wanted to relax my hair
again.  I know that the chemicals are not good for my hair or my scalp,
and I felt that straight hair was capitulating to the Eurocentric
standard.  I took to youtube and learned all about twist outs and Bantu
knots.  Since there are no natural hair salons where I live, let alone a
Black hair dresser, I knew that I would have to care for my hair on my
own.  I spent time asking all the Black women I knew where they got
their products and set about trying to find something that wouldn’t
break the bank, that would still work for my natural hair.  Let me tell
you that was a tough task.  As much as Carol’s Daughter for instance,
has an incredible line of products, for everyday care, they are
extremely expensive.

After several horrible attempts, I finally was able to rock a twist out
that worked for me.  I covered it that night, went to bed and the
morning, my hair was a disaster.  From this I learned that to make this
look work, I would have to retwist my hair nightly.  It seems like a
small thing, but when you’re hands are aching and the thought of raising
your arms up does not sound at all appealing what do you do?  Okay,
that means an afro on the days that I am incapable of twisting, a look
btw that I am not fond of on me.

I made the decision to buy a wig to wear on the days when twisting my
hair was simply not going to happen, through time constraints, or aching
hands.  The thing about this whole purchase is that I had to agonize
over it.  What was I saying politically by buying a wig?  Did this mean
that I didn’t love my natural hair enough to fight the good fight?  Was
making the decision to buy a wig an internalization of Black hatred?  On
and on it went in my mind.

Finally, I talked to Monica of Transgriot and her answer was, “Renee,
just buy the damn wig and move on”.  I made the decision and I bought a
wig, which btw I love and looks great on me.  I have actually gotten
several compliments on it.  Still, every time I put it on, the niggling
questions still remain.  I have to come to realize that the fact that I
have to question what I am doing with my hair is a reflection of the
ways in which my body is policed.  Though hair should be a simple thing,
it is not the case with Black women.

When I first went natural, I had to threaten to sue my former employer
because they deemed my natural hair to be radical.  This applied to
breads, dreadlocks and afros if you can believe it.  Hair that was not
neatly combed was deemed unkempt.  They had a business to run and there
was no room in that business plan for me to be who I am naturally.  I
know without a doubt, that I am not the only Black woman who has been
through this.

When Viola Davis took off her wigs and went to Academy Awards with her
natural hair she was praised solidly by many Black women.  The fact that
there was conversation after conversation about a woman wearing her
natural hair in public proves how political Black women’s hair choices
still are.  Sheri Sheppard of The View has talked openly about her wigs and weaves.  Just recently, she commented that her partner from Dancing With the Stars
kissed her weave for good luck before her performance, which is
something she says, “never happens to her.”  Sheri travels everywhere
with her wigs.  Though she commonly shares the stage with Whoopi
Goldberg, who has dredlocks, Sheri very rarely wears her natural hair.
Whoopi, has long been considered the anti-beauty of Hollywood. With the
exception of the rare few like Whoopi, Solange, Wanda Sykes and Lauren
Hill, most of the Black female celebrities that we see in the media
either have relaxed hair [note: this includes blow outs], or are rocking
weaves and wigs.  Beyonce is famous for her lacefronts.

Have all of these women really internalized such a negative view of
their natural hair, or have the circumstances of their lives caused them
to make specific choices about their hair?  By making these choices,
does it mean that they don’t love their Blackness, or that they aren’t
thinking of the examples they are setting for the young girls who are
watching them, hoping to emulate them some day?  I don’t think that’s
the case at all, after much thought on the issue.  I used to believe
that relaxed hair was the sign of a colonized mind.  I used to believe
that hair had to be neat and kept even if it was natural.  Now I know
that women make hundreds of choices everyday, and that unless we are
walking around in their head, we have no idea what lead to the decisions
they have made.

As long as we live in a racist society, there is always going to be a
cost for wearing our hair natural.  There are always going to be those
believe that our failure to conform to Eurocentric beauty standards
makes us radical.  The bottom line is that no matter what decision a
Black women chooses to make with her hair, we have no business
questioning it.  For me it really comes down to respecting women’s
bodily autonomy.  Sure, more women walking around with natural hair
would be nice to see, but at the same time, with the costs that we know
which can arise from such a decision, using natural hair as a barometer
to decide how much someone has internalized negative ideas about
Blackness is not only judgmental, it’s wrong.

It shouldn’t have to be this hard.  The agonizing and the worry should
not have to be part of a decision to wear a wig, weave, blow out,
relaxed hair, dred locks, bantu knots, or twist outs.  What these styles
should represent are options Black women can choose at will based on
what they feel looks good on them.  Whether it’s twist outs today, or my
wig tomorrow, it shouldn’t say anything about me to the world.  I am
the same person, no matter what I choose to do with my hair.  I have
come to see the hair policing and debate as yet one more thing that
keeps us distracted and focused on each other, rather than the society
that has created ridiculous standards of appearance. In the end, I have
decided to go with what looks good on me, and what makes me feel
confidant and beautiful. Today it is my funky gravity defying twist out,
but tomorrow it may be my wig.