Black trans people are Black people.  We are also the Black men and Black women we say we are.  In many cases we fight for our very existence in the same neighborhoods cis Black people live in and we grew up as part of.  We Black trans people are also there when it comes to fighting for the causes that are important to the Black community as a whole, Now it’s past time, NAACP for you to stand with us.-TransGriot, March 2, 2017

Of all the organizations that expressed outrage about 45’s tweet attempting to eviscerate trans people from the US military, I noticed that despite the NAACP currently having their 108th Annual Convention in Baltimore and having an LGBT Forum last night,  there is still a deafening silence coming from the NAACP concerning transgender people.

And as a former youth member of the NAACP who is contemplating rejoining the organization, that is bothering me.

Yes, the NAACP Legal Defense Fundhas commented on Trump’s anti-trans tweet and that’s wonderful they did so.

But what we Black trans peeps need to see and hear is a board, NAACP presidential or chair level statement unequivocally spelling out where this 108 year old organization stands when it comes to the humanity and human rights of trans people, and backing that up with action. Just an FYI NAACP, some of those 15,500 active duty transgender service members Trump attacked happen to be Black

We Black trans folks are catching hell, and we have noted that you have been far too silent about it.The Republican Party is gleefully passing anti-trans legislation like the odious SB 3 that just passed through the Texas Senate.  We have had 15 trans women of color murdered in 2017, with 13 of those women being Black.   Most disturbing to me is the increasing levels of anti-trans rhetoric being uttered in our community spaces, the time is now NAACP for you to step up and provide the moral leadership inside this community and unequivocally state that Black trans women are Black woman, Black trans men are Black men, and the NAACP will fight for their humanity and human rights.

And we need that said not only at the national level, but in state and local NAACP chapters as well.

As Jade Lenore of BTWI-Texas recently stated, “ NAACP can you take a stand for the Trans people of the Black community? Myself and others need to know if you support us and stand with us. Will you defend us against this blatant hatred that ripping through our Black Trans community?” 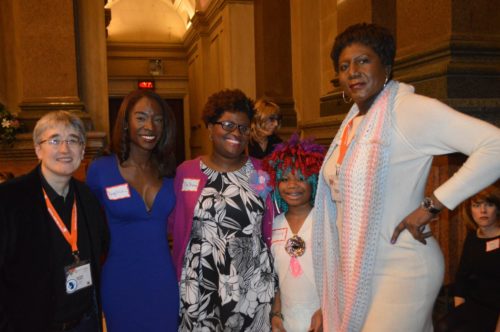 I’d like to know the answer to that question myself, NAACP? .

So what say ye, NAACP?   Will you summon the moral courage to stand with the Black trans community and unequivocally state that you do?  Will you form partnerships with Black trans organizations already doing the work but who could use your century plus civil rights gravitas to aid their efforts? Will you work to become trans culturally competent?  Will you reach out to the Black trans leaders, parents of Black trans children and Black community allies and supporters for guidance to help you get there as expeditiously as possible?

Will you make a dent in our 20% unemployment numbers by actually hiring qualified trans people to do the work of this organization?  Black trans people are damned sure front and center in fighting for the human rights of everyone, including cisgender Black people.

Would be nice if we could get a regular paycheck for doing so.

Or will you do what many people and millennials expect you to do and say nothing, thus justifying the ossifying impression that the NAACP doesn’t care about trans people or anyone that is not heteronormative , and is continuing its journey toward 21st century irrelevance?

We in Black Trans World eagerly await the answer to this question.

1 thought on “I Repeat NAACP, Where You At When It Comes To Trans People?”