When 22 year old cosmetology student Meagan Taylor and a trans feminine girlfriend traveled to Des Moines, IA from Illinois for a visit, they were only planning to stay a few days in the city before returning home.when they checked into the Drury Inn in West De Moines.

Unfortunately transphobic hotel staff and racist assumptions about them would combine to make this visit to Iowa a less than pleasant one.

Taylor and her friend noticed that the staff was in their words ‘acting funny towards them’ when they checked in.

That ‘acting funny’ was the transphobia the hotel staff was expressing, and several hours later it manifested itself into the police arriving at their hotel room door after being called by the staff about ‘two males possibly engaged in prostitution activity.’ 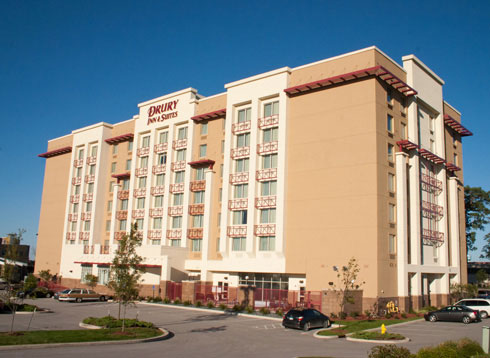 When the police officer arrived to begin the investigation, he found no prostitution activity occurring.   But a search of Taylor’s purse led to the discovery of the spironolactone she was taking as part of her hormone regimen in an unmarked bottle, and she was arrested and charged with possession of prescription drugs without a prescription.

She is also being head-scratchingly charged with  ‘malicious prosecution’, which is an aggravated misdemeanor and Taylor’s bond was set at $2,000.

A subsequent check revealed that Taylor had an outstanding Illinois warrant for a probation violation stemming from a previous 2010 credit card fraud conviction that occurred when she was 17.  She had served time for it, but still owed $500 in fees.

She was taken to a Polk County jail that has no policy for housing trans prisoners, and since she was pre-op, they used a female officer to search the top half of the patdown search and a male office for the  bottom.

Because Polk County officials don’t feel comfortable housing her with women, and the Prison Rape Elimination Act (PREA) still is unclear about where trans feminine prisoners should be housed (it definitely ain’t with the cis men) she’s being stuck in isolation in the medical unit.   She told the Des Moines Register in an interview that if she were from Polk County, she could have paid 10 percent of her $2000 bond and been released.

But because Taylor is from out of state, she would need someone in Polk County to co-sign.  She doesn’t have a lawyer and doesn’t have a court date set until August 25..

So because a transphobic Drury Inn hotel employee racially profiled two Black trans women who were minding their own damned business, Meagan Taylor is stuck in an Iowa jail at least until August 25,  or until she gets some help from the local LGBT community

TransGriot Update,  Since I wrote this post, crowdfunding has started to raise the money to not only pay for bail in Iowa, but the $500 she still owes in Illinois.  Also been advised that an attorney has stepped up to represent Meagan.

There is also a protest being organized that will take place in front of the West Des Moines, IA Drury Inn where this mess started.