It’s why detransition is such a contentious topic in the transgender community.  We get prickly about it not only because of our own personal psychic and sweat equity investments in perfecting our gender presentations and gender identities to the world, but by the awareness that far too often some of the people who do detransition become the trans equivalent of ‘Ex Gays’.

-TransGriot August 15, 2013 One of the things I haven’t talked about much on this blog is the subject of detransition, because frankly, when 95% of the people who transition are leading happier lives despite some of the challenges and that satisfaction percentage shoots up to 98% if that person has gender confirmation surgery. it allows me to focus bandwith on discussing more high priority conversations that people in Trans World and beyond need to hear. ,

I’ve also don’t focus on the miniscule numbers of people who for whatever reason detransition because they get disproportionate levels of media attention for doing so, especially from right wing orgs and outlets.

People transition for many reasons, and as we know, it is not an easy path.  In many cases much hard solid thinking and prayerful consideration went into making the call to boldly live our lives as our true selves and taking the steps to make it happen.

But at the time I transitioned in the early 90’s you were required under WPATH Standards of Care in place then to go through counseling to ensure that you weren’t making this life changing move in a cavalier fashion.  The counseling with a certified gender therapist also ensured that you could discuss some of the issues that crop up and if you were ready to move forward with a transition, or have more time to consider it if you weren’t sure. And I’ve seen and heard it talked about far too often in this community of trans feminine people who tried to suppress their feminine side for decades by going into the military or deeply into regimented religious life, and it becoming intolerable to the point that they eventually come out anyway and transition.

One of the concerns I have along with my trans elders is that we have elements of Trans World who transitioned for the wrong reasons.  They may have loved doing drag and thought their lives would be as fab if they were under the drag spotlight if they became women full time.

Some who transitioned may have lived miserable lives as men and believed that if they became women it would improve them.  They may have thought because of the positive media attention we trans people have been getting lately. it is cool and trendy to be a trans a genderfluid person but didn’t think about the short and long term ramifications of it.

One of the reasons I’m commenting about it right now is because the latest person to start the process of detransition is one I have a personal connection with in Pretty Paris.

But now that Paris has become a born again Christian, for whatever reason he has started the process of detransition.

So yes, I can empathize with those persons who make the call after whatever amount of time they live in Trans World to make the even more difficult call to detransition.  But my empathy has its limits.

One of them is when you detransitioning folks start attacking transpeople as RiRi Nicole and another one who partnered with PFOX did.

The problem I have with that particular group of detransitioned people is that after they do so, elements of them start sounding like right wing christians as they spout their harmful;anti-trans rhetoric. that makes Republican politicians, the TERF’s, professional hate groups and the faux faith based transphobic ignorati smile. 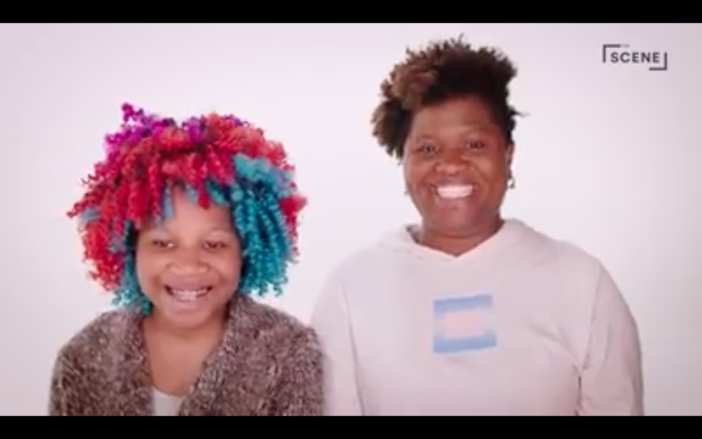 And I really have a problem with it when you detransitioned peeps start attacking trans kids and their amazing parents.

News flash to you detransitioning trans folks before you start quoting Scripture out of context and Bible belting folks.  It is not wrong and never has been wrong to be trans.  Even Scripture is on our side on that point in the Old and New Testaments, and gender variant peeps have been on the planet on every continent except Antarctica (and may even be there in some research facility) since humans started walking the Earth.

God made us just like he did you detransitioning peeps . If you choose to detransition, that’s a personal decision that’s on you, and I wish you the best of luck in your life moving forward.

But don’t you dare demonize those of us in Trans World for who transitioning not only was the correct decision but a lifesaving one that allowed us to be out best selves and live happier lives .

I and other trans people are living our lives, not a lifestyle.  Using that word while wrapping yourself in Scripture to describe being trans IS and will be seen as an insulting attack on us that will get you swiftly and deservedly called out.