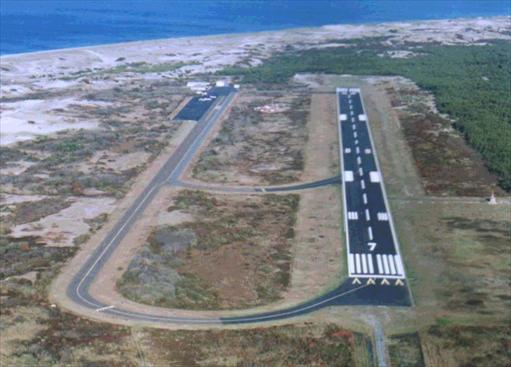 Provincetown Municipal Airport is one of two unique aviation facilities in the country because like Jackson Hole in Wyoming, it sits in a national park.   The Cape Cod National Seashore was created by President Kennedy in 1961 and encompasses 40 miles of the Atlantic Ocean facing eastern seashore of Cape Cod.

And yes folks, P-town airport does have a TSA facility.

Provincetown also has an interesting history.   It was the first landing site of the Pilgrims before they settled in Plymouth in 1620.   The Mayflower Compact was signed aboard the ship while it was anchored in what is now Provincetown Harbor.

It was incorporated in 1727, and has a year round population of 3,000 people that swells to 60,000 during the summer resort season.   Because of its location at the extreme end of Cape Cod, an artists colony developed there;   It also has a well earned reputation as a town that is LGBT friendly, which is why Fantasia Fair started here in 1975.

And it;s cold up- here.   Temp is getting down to 38 tonight, and not long after I landed and settled into my digs at Dyer House it got cloudy and started spitting snow flurries for a few minutes

I’m excited to be here for the week and getting an opportunity to explore it.  I’m looking forward to the start of Fantasia Fair tomorrow and my big day on Tuesday.

I’m now checked into my room, gotten my conference materials with the Participant’s Guide program with my smiling face on it, perused the schedule, and resting a bit before I head to the 7:30 PM Welcome Reception at the Boatslip.

Going to be an interesting week, and it starts in a few hours