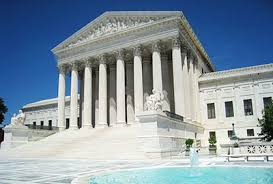 On Friday the US Supreme Court announced that they would hear the Gloucester County, VA school district’s appeal to the 4th Circuit ruling that favored Grimm.   It also sets up a landmark case that could determine the course of transgender rights in the US for decades to come.

A group of 23 states led by my transphobic Texas attorney general Ken Paxton (R) is fighting the DOE/DOJ guidelinesthat were issued by the Obama administration on behalf of transgender students. The ACLU filed the original lawsuit on behalf of Grimm in 2015 because the Gloucester County board adopted a policy in December 2014 requiring trans students to use only single stall restrooms after some transphobic parents complained to the board.

That was despite the fact that Grimm, who was a high school sophomore at the time the unjust policy was adopted, had been using the boys restrooms for two months without incident with the permission of the school’s principal

The ACLU contends that this is a violation of the 14th Amendment to the US Constitution and Title IX of the US Education Amendments of 1972, which is a federal law prohibiting sex discrimination in school.

Grimm originally lost at the federal district court level, but won his appeal infront of a three judge panel at the 4th Circuit court of appeals level in April.  The 15 judges of the 4th Circuit declined to rehear the case in May, thus establishing a trans positive precedent in the 4th Circuit court states that include North Carolina.   The Gloucester County school board decided to appeal the case to the Supreme Court, which in August unfortunately put the appellate ruling on hold .

The justices have finally decided to get off the sidelines and settle this matter.   It is hoped that by the time they hear this case sometime in April, there will be nine justices to hear it.

We’ll also be nervously anticipating in Trans World the Grimm case ruling when it is announced in June 2017.