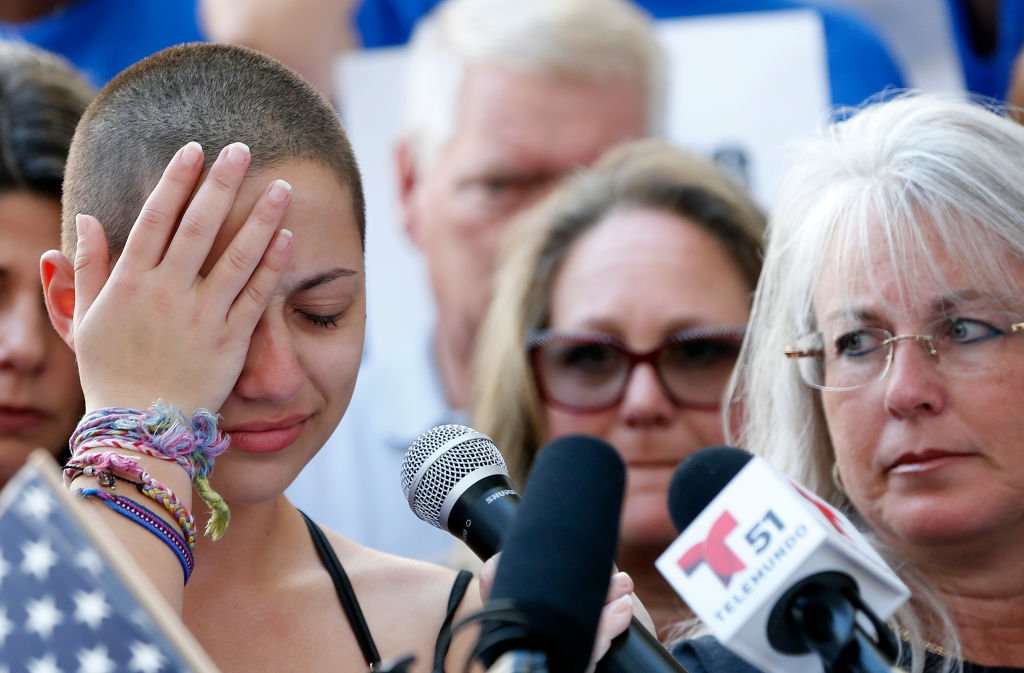 As you may be aware, Marjory Stoneman Douglas High School senior  Emma Gonzalez put Trump, the Republican Party and the NRA on blast during her powerful speech at a gun control rally in For Lauderdale, FL a few days ago that has since gone viral.

Here’s  Ms. Gonzalez’s speech.   The text of it is below the video.

We haven’t already had a moment of silence in the House of Representatives, so I would like to have another one. Thank you.

Every single person up here today, all these people should be home grieving. But instead we are up here standing together because if all our government and President can do is send thoughts and prayers, then it’s time for victims to be the change that we need to see. Since the time of the Founding Fathers and since they added the Second Amendment to the Constitution, our guns have developed at a rate that leaves me dizzy. The guns have changed but our laws have not.

Instead of worrying about our AP Gov chapter 16 test, we have to be studying our notes to make sure that our arguments based on politics and political history are watertight. The students at this school have been having debates on guns for what feels like our entire lives. AP Gov had about three debates this year. Some discussions on the subject even occurred during the shooting while students were hiding in the closets. The people involved right now, those who were there, those posting, those tweeting, those doing interviews and talking to people, are being listened to for what feels like the very first time on this topic that has come up over 1,000 times in the past four years alone.

I found out today there’s a website shootingtracker.com. Nothing in the title suggests that it is exclusively tracking the USA’s shootings and yet does it need to address that? Because Australia had one mass shooting in 1999 in Port Arthur (and after the) massacre introduced gun safety, and it hasn’t had one since. Japan has never had a mass shooting. Canada has had three and the UK had one and they both introduced gun control and yet here we are, with websites dedicated to reporting these tragedies so that they can be formulated into statistics for your convenience.

I watched an interview this morning and noticed that one of the questions was, do you think your children will have to go through other school shooter drills? And our response is that our neighbors will not have to go through other school shooter drills. When we’ve had our say with the government — and maybe the adults have gotten used to saying ‘it is what it is,’ but if us students have learned anything, it’s that if you don’t study, you will fail. And in this case if you actively do nothing, people continually end up dead, so it’s time to start doing something.

There is one tweet I would like to call attention to. So many signs that the Florida shooter was mentally disturbed, even expelled for bad and erratic behavior. Neighbors and classmates knew he was a big problem. Must always report such instances to authorities again and again. We did, time and time again. Since he was in middle school, it was no surprise to anyone who knew him to hear that he was the shooter. Those talking about how we should have not ostracized him, you didn’t know this kid. OK, we did. We know that they are claiming mental health issues, and I am not a psychologist, but we need to pay attention to the fact that this was not just a mental health issue. He would not have harmed that many students with a knife.

If the President wants to come up to me and tell me to my face that it was a terrible tragedy and how it should never have happened and maintain telling us how nothing is going to be done about it, I’m going to happily ask him how much money he received from the National Rifle Association.

You want to know something? It doesn’t matter, because I already know. Thirty million dollars. And divided by the number of gunshot victims in the United States in the one and one-half months in 2018 alone, that comes out to being $5,800. Is that how much these people are worth to you, Trump? If you don’t do anything to prevent this from continuing to occur, that number of gunshot victims will go up and the number that they are worth will go down. And we will be worthless to you.

To every politician who is taking donations from the NRA, shame on you.

(Crowd chants, shame on you.)

If your money was as threatened as us, would your first thought be, how is this going to reflect on my campaign? Which should I choose? Or would you choose us, and if you answered us, will you act like it for once? You know what would be a good way to act like it? I have an example of how to not act like it. In February of 2017, one year ago, President Trump repealed an Obama-era regulation that would have made it easier to block the sale of firearms to people with certain mental illnesses.

From the interactions that I had with the shooter before the shooting and from the information that I currently know about him, I don’t really know if he was mentally ill. I wrote this before I heard what Delaney said. Delaney said he was diagnosed. I don’t need a psychologist and I don’t need to be a psychologist to know that repealing that regulation was a really dumb idea.

The people in the government who were voted into power are lying to us. And us kids seem to be the only ones who notice and our parents to call BS.Companies trying to make caricatures of the teenagers these days, saying that all we are self-involved and trend-obsessed and they hush us into submission when our message doesn’t reach the ears of the nation, we are prepared to call BS. Politicians who sit in their gilded House and Senate seats funded by the NRA telling us nothing could have been done to prevent this, we call BS. They say tougher guns laws do not decrease gun violence. We call BS. They say a good guy with a gun stops a bad guy with a gun. We call BS. They say guns are just tools like knives and are as dangerous as cars. We call BS. They say no laws could have prevented the hundreds of senseless tragedies that have occurred. We call BS. That us kids don’t know what we’re talking about, that we’re too young to understand how the government works. We call BS.

If you agree, register to vote. Contact your local congresspeople. Give them a piece of your mind.

(Crowd chants) Throw them out.