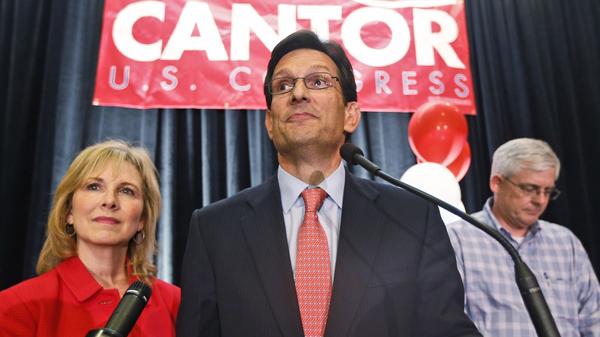 That dislike of Cantor goes back to August 2009 when Rep. Lynn Jenkins (R-KS)
referred to him (and McCarthy and Ryan) as ‘Great White Hope leaders’ in the wake of their loss of the White House to then Senator Barack Obama.

So you know I was doing the happy dance when the breaking news came onscreen as I was watching MSNBC about Cantor losing his House primary race to Teapublican challenger Dave Brat.

And it wasn’t a narrow loss either.  Cantor got spanked by 12 percentage points and lost to a guy he outspent by a 25-1 margin.   Hey, as the POTUS proved in 2012, Koch Brothers money can’t buy everything and in many cases, it IS about the candidate.

Cantor made some history with this political earthquake of a loss.   He is the first sitting House majority leader to not even survive his party’s primary.

In case you’re wondering, there is a Democratic candidate in the Virginia 7th Congressional District race in college professor Jack Trammell, who ironically works at the same college as Brat.

Now we need to send some cash to Trammel and help him win that seat.