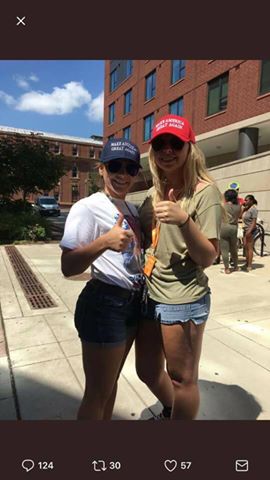 Laughing my butt off at the faux outrage coming from conservafool white America because two high school Beckys waltzed onto the campus of Howard University to cause drama, got what they were looking for, and are now crying white women’s tears on the Net about it.

Naw b  oo boo kitties, what did you Trumpettes think was gonna happen when you disrespectfully stepped onto the campus of the flagship HBCU in the nation with Make America Great Again hats on, and you do so mere days after Dolt 45 cosigns white supremacists in Charlottesville?

Exactly what you got.  All I have to say about it is don’t let your white supremacist POTUS get your azz cussed out or put in the position to get a beatdown.

There are times when you have to give people exactly what they are looking for to send a message that we ain’t having it.   One of the places that Black folks aren’t tolerating conservative white BS is on the campus of one of our flagship HBCU’s.

Your excuse of you were going to have lunch on the HU campus isn’t going to fly either.  When I visit The District, there are a lot of places I have gone to eat or been taken to in DC like Ben’s Chili Bowl, Five Guys or Eatonville just to name a few.   No one has ever suggested that we dine at the HU cafeteria.

So you two New Jersey Beckys can go cry all the white tears you want on FOX Noise and in conservafool fake media about how mean the Black college kids were to you.  You were the agent provocateurs who jumped this mess off.

High fives to the HU students who called your lack of home trained asses out on your vanillacentric privileged bull feces.  Kudos also to Howard University for standing up for their students and their right to be hostile to these troublemaking Beckys

Black America is not in a mood to be disrespected or played with right now, especially when you white peeps in this country have been running buck wild ever since Orange Julius was elected.

And we damned sure aren’t going to tolerate it from you Trumpettes who are part of the 53% white female demographic that delusionally put him in office.

So miss us with this mess.   And I repeat, don’t let your POTUS get your azz cussed out.