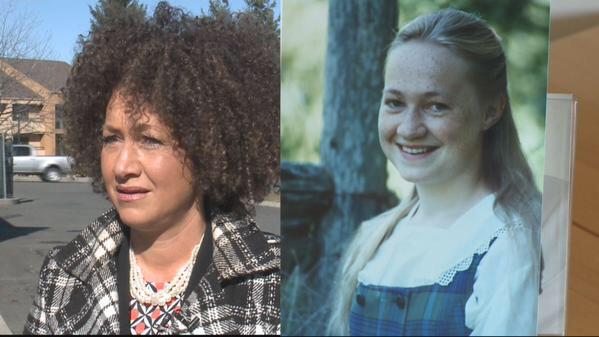 The Rachel Dolezal kerfluffle has started another national conversation on race with all its complicated layers   It incorporates appropriation.  It hearkens back to the bad old days in which light skinned Blacks, in order to escape the crushing discrimination and cruelty aimed at our people, would pass for white in order to not only get a respite from that anti-Black hatred, but gain better access to opportunities for themselves.

Now what Rachel Dolezal has done is she has flipped the script on passing and that is messed up on many levels.  Unless she does a DNA test that proves she has some African heritage, she is a white woman who not only appropriated our culture, she did so for her own personal gain to get into Howard, as a professor at Eastern Washington University, her position at the NAACP Spokane branch, and used blackface to do it.

It has also shined a light on the bull feces laden concept of ‘transracial’ at the same time being deployed by some whites trying to justify her behavior.and opened the door to the discussion in the Black community about what Blackness is and isn’t.  It has people looking side-eyed at our light skinned brothers and sisters, who already deal with enough crap in having their Blackness questioned and scrutinized.

I say transracial is bull crap because race is not just solely a social construct, it also has a biological component as well.   Transracial is nothing more than white peeps wanting to come up with a fancy new name for appropriation.  They want to have the ability to mimic another racial identity without having to deal with the historical societal baggage that comes with it.

And it stuff gets too real for them, they can always run back to whiteness.  People of color have to play with from birth until death the genetic, sociological and racial hand they are dealt.

By Dolezal faking and shaking about being a Black woman, which no white woman has an inkling about the challenges of and white feminists have repeatedly demonstrated they don’t, she has made it harder for the stories of cis and by extension Black trans women to get the media attention they deserve.

Speaking of media attention, she has also by her actions and the media getting wind of it, killed the national discussion building in the wake of the police brutality aimed at Black teens in McKinney, TX.   But maybe that was the intent of the right-wing media that brought this whole issue up in the first place.

The sad thing is that Dolezal didn’t have to go to those outrageous lengths to be down with my people.  There are hundreds of examples throughout history of white folks being themselves, and using their power and privilege to become allies helping the African-American community and other communities of color overcome oppression.

And FYI, several of the NAACP’s eight founders were white.

It has also opened the problematic door to another discussion that is pissing me off in terms of using this Dolezal situation to attack transpeople and invalidate our sincerely held identities as men and women of trans experience.

Every gender transition is different.  For those of you trying to peddle that false equivalency of what Dolezal did with being transgender and use Caitlyn Jenner’s name in vain while doing so, you can stop that madness right now.  Being trans has a medical component to it as the decades of ongoing medical research on transsexuality points out.  Let’s not forget that race also impacts a gender transition. And as that medical evidence is increasingly pointing out, trans women are women, trans men are men, and the genitalia between your legs or your chromosomes doesn’t necessarily correspond to the gender identity between your ears.

Unlike Dolezal, a trans person has to have counseling under a certified gender therapist, hormone replacement therapy, other optional procedures to look their gender best, and live in the targeted gender for at least a year before that gender therapist will sign off on you getting genital surgery.

We transpeeps are living our authentic lives, not a script-flipped remake of Imitation of Life like Dolezal was unless a DNA test proves otherwise.

So no transphobes and peeps trying to use this convoluted situation to pump up the BS transracial crap and take a swipe at transpeople at the same time, don’t go there.  .