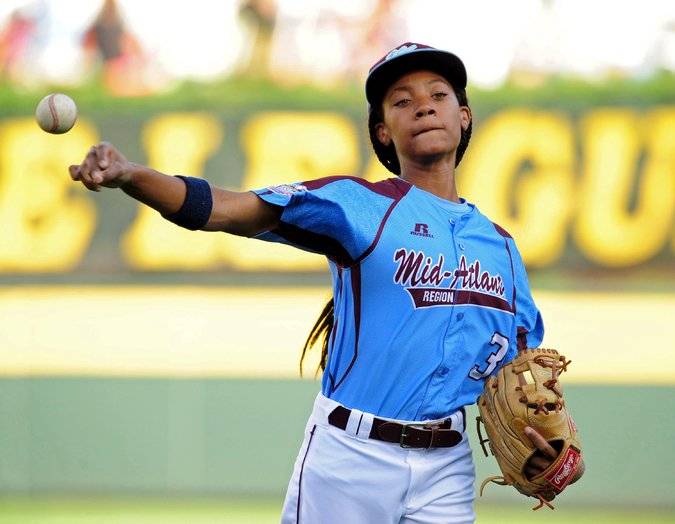 Mo’Ne is the 18th girl to make it to the LLWS, but she has the sporting world’s attention as one of the few girls in the 67 year history of the LLWS to be the star player of their Little League team.

Her Taney Youth Baseball Association Little League of Philadelphia squad got to the 2014 Little League World Series in Williamsport, PA on the strength of her pitching arm and her 70 MPH fastball.

In addition to the personal history Davis is making, her Taney squad is also making it as a team. They are the first team from Philadelphia to make it to the LLWS.

In the Taney Dragons first game on Friday a 4-0 win against Nashville, Tennessee, Davis proved she was no joke as she pitched her second complete game,   She gave up only two hits and struck out eight batters enroute to becoming the first girl ever in the 67 year history of the event to pitch a shutout. .

In the game last night against Pearland East, my H-town suburban homies and the overflow crowd  of 32,000 found out that Mo’Ne can hit, too.

Her first inning single made her only the sixth girl to record a hit in LLWS play and help her Taney Dragons team to a 7-6 win that puts them two game away from the US Championship.

They face Mountain Ridge LL from Las Vegas in the winners bracket on Wednesday.

Hopefully Mo’Ne and Taney LL will continue to prove that baseball diamonds are a girl’s best friend, too.