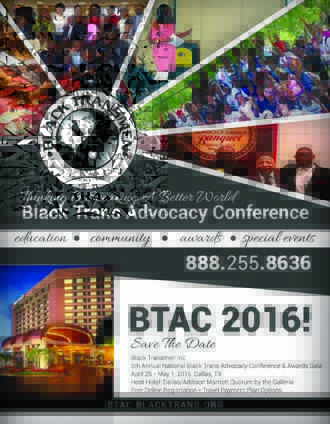 We are less than 30 days from the start of the 2016 edition of the Black Trans Advocacy Conference in Dallas and it’s one of my favorite events for many reasons.   .

In addition to the fact it happens in my home state, it’s one of the few conferences in which we get to see a significant level of visibility of trans masculine participation.  Since 2013 Black trans women have also been an increasingly integral part of the BTAC action with it being an unapologetically Black trans centered conference open to all who wish to attend..

I believe so strongly in the mission of this organization I sit on the Black Transwomen, Inc board.

It also ends around, on or just before my Cuatro de Mayo birthday, so I treat it as an extended birthday celebration week.. And yep, I’ll be doing a couple of seminars this year during the event which runs from April 25-May 1.

The keynote speakers for this year’s event are Mr. Cris and Dora Santana, and that’s just one of the events taking place during an empowering week that included the Awards Gala, the Mr. and Ms. Black Trans International pageants, the Black Diamond Ball, and the eagerly anticipated Family Fun Day.

There’s still time for you to make plans to be at BTAC, which is celebrating its fifth year and is moving to a new hotel, the Dallas/Addison Marriott Quorum.

Hope to see y’all in my home state in less than 30 days!