A mere hour after the conclusion of the panel I was on at Comic Con discussed TBLGQ visibility in the comic and sci-fi fantasy world, Faith Cheltenham and I ran into a woman and her husband doing a blackface version of Star Trek’s Guinan and two Klingons.

And yeah we called them out for it.

One of the bull feces laden excuses she tried to deploy with both of us was that she was ‘honoring Black women’ because ‘there weren’t any Black people’ at Comic Con.

While Comic Com is an event that is predominately white, Black folks and other people of color do show up at Comic Con and are part of the cosplaying world. I saw many brothers and sisters walking around the San Diego Convention Center and the nearby Gaslight District cosplaying as their fave characters from the sci-fi and comics worlds this year.

I had enjoyable conversations with many of them as I wandered the San Diego Comic Con halls, and they laughed and rolled their eyes when I told them about my encounter with the blackface Guinan and the ridiculous comments she made trying to justify her mess.. 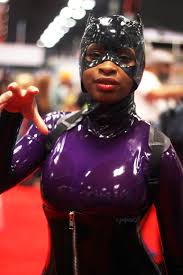 These cosplaying sisters have also been handling their business at previous Comic Cons and even regional comic conventions.

Cosplaying sistahs exist, so spare me the bald faced lie that they don’t.