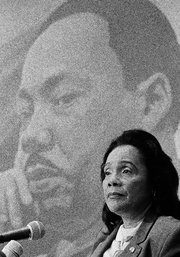 US Senate Rule 19 doesn’t affect me.   Here’s the letter that Senator/Elizabeth Warren (D-MA)tried to read in the Senate chambers last night about Jeff Sessions that the Republican majority was ‘scurred’ of her doing and censured her for doing so, but allowed three white male Democratic senators to read.

Hmm, wonder if McConnell would have used Rule 19 on Sen Cory Booker or Sen. Kamala Harris had they tried to read it?

Here’s the text of Coretta Scott King’s letter in opposition to Sessions getting a federal judgeship.


The introduction:.
Dear Senator Thurmond:I write to express my sincere opposition to the confirmation of Jefferson B. Sessions as a federal district court judge for the Southern District of Alabama. My professional and personal roots in Alabama are deep and lasting.

Anyone who has used the power of his office as United States Attorney to intimidate and chill the free exercise of the ballot by citizens should not be elevated to our courts.

Mr. Sessions has used the awesome powers of his office in a shabby attempt to intimidate and frighten elderly black voters.

For this reprehensible conduct, he should not be rewarded with a federal judgeship.

I regret that a long-standing commitment prevents me from appearing in person to testify against this nominee. However, I have attached a copy of my statement opposing Mr. Sessions’ confirmation and I request that my statement as well as this letter ‘be made a part of the’ hearing record.

I do sincerely urge you to oppose the confirmation of Mr. Sessions.

Here’s the text of Coretta Scott King’s letter about Sessions.

Mr. Chairman and Members of the Committee:

Thank you for allowing me this opportunity to express my strong opposition to the nomination of Jefferson Sessions for a federal district judgeship for the Southern District of Alabama. My longstanding commitment which I shared with my husband, Martin, to protect and enhance the rights of Black Americans, rights which include equal access to the democratic process, compels me to testify today.Civil rights leaders, including my husband and Albert Turner, have fought long and hard to achieve free and unfettered access to the ballot box. Mr. Sessions has used the awesome power of his office to chill the free exercise of the vote by black citizens in the district he now seeks to serve as a federal judge. This simply cannot be allowed to happen. Mr. Sessions’ conduct as U.S. Attorney, from his politically motivated voting fraud prosecutions to his indifference toward criminal violations of civil rights laws, indicates that he lacks the temperament, fairness and judgment to be a federal judge.

Unfortunately this racist man was nominated by 45 to become the next Attorney General of the United States and was just confirmed in a straight party line vote.

And you Bernie or Busters and third party voters in swing states greased the skids for this to happen..