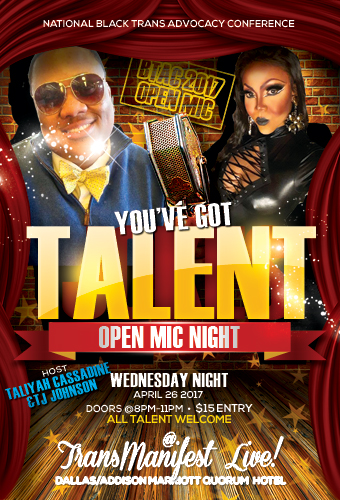 We’re continuing to gather in Dallas for the 6th annual Black Trans Advocacy Conference,  and the first day of i t was a busy one for me.   In addition to a radio interview on KERA, I also was asked to take part in the opening interfaith service. and was part of a mazing AYOMBI conversation with my trans sisters from around the country until a little after 10 PM CDT that continued into the early morning hours.

Today is the second full day of the Black Trans Advocacy Conference here at the Dallas/Addison Marriott a the Galleria.  In addition to our second day of panel discussions starting at 9:45 AM CDT, we will have starting at 2 PM our annual Black Trans Community Summit

The featured BTAC event tonight is the TransManifest Live! open mic show that starts at 8 PM hosted by Taliyah Cassadine and  TJ Johnson

And as is the case at any conference , if you see me in the halls, don’t be shy, say hi.

I’m I’m not involved in the event, I’ll also be tweeting and talking about it at the #BTAC2017 hashtag along with my BTAC fam.