Been amused by the Bernie Bros getting their draws in knots about the fact their Democratic socialist candidate who is trying to hijack the 2016 Democratic Party presidential nomination is so far getting his political azz whipped by Sec. Hillary Clinton.

They are shocked this is happening, and are lashing out in nekulturny ways at everyone who doesn’t share their love of St. Bernard of Sanders, the progressive lord and political savior of all and sole arbiter of who is or isn’t progressive enough in his eyes who will lead us to the promised land of free college, universal single payer healthcare and a grand era of American unity and harmonious race relations.

With Clinton having a 300+ delegate lead, they are bristling at calls for Bernie to drop out of the race by claiming they are the base and they haven’t spoken yet, California primary is coming, and all the other spin line they say to themselves and online to keep hope alive. 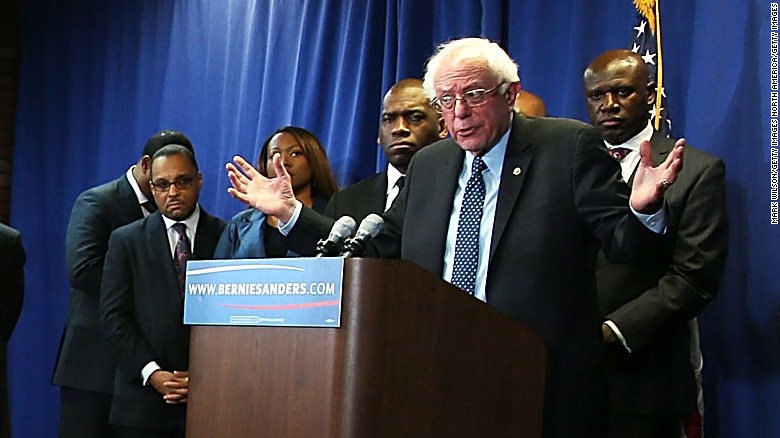 That 84-16% gap among Black voters is the reality check smacking them in the face why Bernie is losing. He realized too late along with his team that #BlackVotersMatter, and because he has failed to make his case to the unacknowledged and far too often ignored base of the Democratic Party in Black voters.

Clinton rolled through the South like Sherman and Grant piling up blowout wins because of a relationship she and her husband have cultivated with Black Democrats since 1972, and it is that history as a Democrat that has her on the path to the Democratic presidential nomination..

That Black voter advantage is a major reason why she pulled out narrow wins in her home state of Illinois last week and in Missouri in addition to winning 11 Southern states and Ohio in blowout margins . Black voters matter, especially in Democratic primaries because they are the base of the Democratic party.

Let me repeat that for you once again, and follow the bouncing Hillary logo.  Black voters are the base of the Democratic Party

Black voters have been the most loyal constituent groupof the party since the modern era 1964 shift of Black voters becoming unapologetic Democratic Party members and massive bloc voters for Democratic candidates at ll level of government.

It is also our population clustered in critical presidential battleground states like Florida, Virginia and Ohio just to name a few is why we have political clout beyond the 13% of the US population we make up.

While some of you Bernie Bros were voting third party and railing about how much you hate the two party system, we Black voters were getting busy for five decades not only voting in long lines for Democratic Party candidates without fail, but working from the precinct to the DNC level to sustain and grow the party and elect the viable Democratic party candidates that would advance our political and economic interests.

The fact that Bernie has disparaged the party and called for the highly popular President Obama to be primary challenged in 2011 is a major reason why he is getting the collective thumbs down from a clear majority of African-American voters.  Bernie Bros disrespecting Rep. John Lewis and racistly commenting as Sen. Sanders was getting trounced in the South also didn’t help.

And when you Bernie Bros or your candidate disses the diverse Democratic Party we helped build with our decades of effort, votes and sweat equity, it is an indirect slap at the Black voters who want a Democrat to get the Democratic presidential nomination, and not some johnny come lately who admitted he only joined because he thought it would give him a better chance to win the presidency.

With America becoming a more diverse place, it has been Black voters fueling Democratic presidential wins, and especially Black women. Our share of the vote has been in creasing, not decreasing, which is why the Republicans have been hellbent on passing voter suppression laws in a desperate attempt to squash Black voter turnout. ..

So no Bernie Bros, you aren’t the base of the Democratic Party, Black voters are, and it’s time you you and America to recognize that fact.