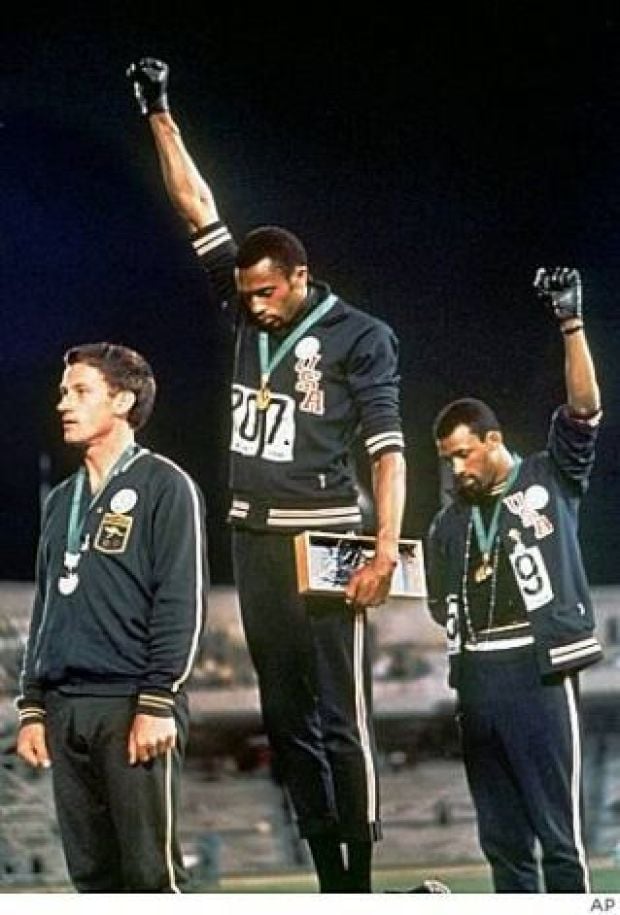 With the conservafools getting all bent out of shape about Colin Kaepernick NFL anthem protests that are being joined by other NFL players, and now going viral thanks to 45’s racist mouth, need to point out that being a Black athlete has always been intimately tied to politics.

From the hatred aimed Jack Johnson’s way as heavyweight champion and beating a succession of ‘Great White Hopes’ challenging him for his title to Jesse Owens, Joe Louis, Jackie Robinson and  Serena Williams, athletic excellence has never been enough for the Black athlete.  They also in many cases have to navigate racism, sexism. and countless other issues from the hardwood to the tennis courts.

Black athletes don’t get the luxury of just ‘shutting up and play’ as the conservafools derisively shout at them.  In many cases Black athletes have used their sporting platforms to call attention to the social injustices of the day as Muhammad Ali and Jim Brown did.

Or racist controversies find them. 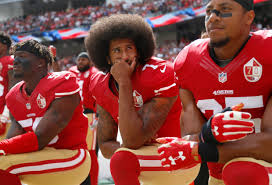 And when they do call out America’s faults, they are passionately hated on by White Americans as Colin Kaepernick has discovered.   He chose to take a knee during the national anthem in solidarity with the Black Lives Matter movement and to protest police brutality aimed predominately at Black Americans.

Bob Beamon almost didn’t make the 1968 Olympic team and get to execute that then world and current Olympic record 29-2 long jump at the Mexico City Olympic games.  People were upset that he and other Black athletes protested the WAC Track and Field Championships held at Brigham Young University that spring.   They were being protested because of the Mormon church’s anti-Black theological beliefs and UTEP suspended him..

Black female athletes also have had to battle in addition to the racism aimed at them, misogyny. accusations of cheating and ‘that’s a man’ shade simply for excelling at their sport as the Williams sisters, Caster Semenya, Brittney Griner and a far too long list of African descended female athletes can testify to. 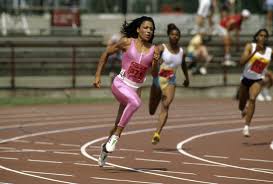 Florence Griffith Joyner brought style to track and field along with undeniable speed and talent/  Her 1988 100m world record still hasn’t been touched.   But she was dogged by allegations of steroid use that followed her to the grave despite years of clean drug tests.

And how many times have we seen Serena Williams continue to win Grand Slam tournaments, with her 2017 Australian Open win happening while she was 23 weeks pregnant. while having ‘that’s a man’ shade and accusations of substance abuse repeatedly uttered at her?

Black athletes are in many cases also carrying the hopes and aspirations of an entire people on their shoulders, especially if they are in a white dominated sport like tennis, swimming or gymnastics.

It’s why Serena ‘s repeated Grand Slam tournament victories or the success of Dominique Dawes, Gabby Douglas and most recently Simone Biles was a point of pride in Black America. And that Black athlete doesn’t even have to be from the US for Black Americans to cheer for them. We were cheering just as loudly for Usain Bolt as his Jamaican countrymen were and griped at the obvious discrimination that French figure skater Surya Bonaly faced as she was competing in the figure skating world of the 90’s.

Being a Black athlete has always been a political act.  As long as injustice and anti-Blackness exists in the world, it’s sadly going to continue to be that way.