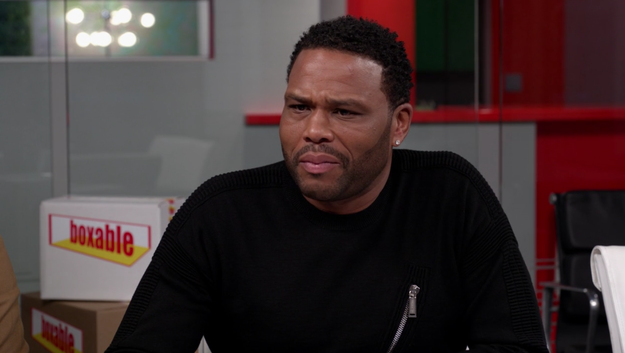 Last night i was busy flipping channels between Star and the Black-ish episode entitled ‘Lemons’ that focused on the tensions that have been exacerbated in this country since Trump (yuck) won this contentious 2016 presidential election with three million fewer votes.

Anthony Anderson’s character Andre Johnson during his monologue encapsulated many of the feelings I and many African Americans have concerning this recent election and the subsequent loud and contentious debates that in some cases have ended friendships.

“You don’t think I care about this country? I love this country, even though at times it doesn’t love me back. For my whole life, my parents, my grandparents, me — for most black people, this system has never worked for us. But we still play ball, try to do our best to live by the rules even though we knew they would never work out in our favors. Had to live in neighborhoods that you wouldn’t drive through; send our kids to school with books so beat up you couldn’t read them; worked jobs that you wouldn’t even consider in your nightmares. Black people wake up every day believing that our lives are going to change, even though everything around us says it’s not. Truth be told, you ask most black people and they’d tell you that no matter who won this election, they didn’t expect the hood to get better. But they still voted, because that’s what you’re supposed to do.

You don’t think I’m sad that Hillary didn’t win? That I’m not terrified about what Trump’s about to do? I’m used to things not going my way. I’m sorry that you’re not and it’s blowing your mind, but excuse me if I get a little offended that I didn’t see all of this outrage when everything was happening to all of my people since we were stuffed on boats in chains. I love this country as much if not more than you do, and don’t you ever forget that.”

Truth.  I emphatically get what that Anderson monologue to the tune of Billie Holiday’s Strange Fruit was saying about many African Americans feeling like this country doesn’t love us back.
Iexpressed the same sentiments in a TransGriot post I wrote in the immediate aftermath of Trump being declared the winner.
Right now I’m once again processing the fact that my country hates me.   That’s not something I wanted to or needed to ponder before going to sleep tonight.-TransGriot,  November 9, 2016

I hear ‘I hate you’ with every white person gleefully cheering for Trump. stating they proudly voted for him or expressing pride that he won.  I hear that with every white supremacist I see giving Nazi salutes while hollering ‘Hail Trump’ and every smirking Bernie or Buster who loudly and wrongly claims Bernie would have won.

That’s why he is #notmypresident, and I will never respect him.  I will gleefully be dancing in the streets when he leaves office on January 20, 2021