“Where they burn books, they will ultimately also burn people.”

85 years ago today Nazi Germany committed a crime against knowledge.

After conducting a May 6 raid on the Magnus Hirschfeld Institute which since 1919 had been doing pioneering research on trans and gay people, on May 10, 1933 the institute’s 20,000 books and 500 images along with other ‘unGerman’ books went up in flames in the Opernplatz (now called the Bebelplatz) as Nazi Propaganda Minister Joseph Goebbels spoke in front of a crowd of 40,000 people.

The other critical thing that was seized in that May 6 raid was the Institute’s lists of names and addresses.   Some historians assert the list was used by the Gestapo and SS to launch the 1934 purge against the Ernst Rohm led SA and round up of the German TBLGQ people left in the country called Operation Hummingbird. 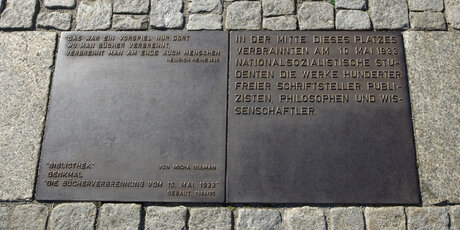 Marking the spot in the Bebelplatz where our TBLGQ history and knowledge went up in flames along with other books deemed ‘unGerman’ by the Nazi regime is a plaque with the Heine quote and a glass panel.   It’s a window that allows you to peer into an underground room with empty bookshelves, symbolizing the knowledge and history that went up in flames on that day. We are dangerously close in the United States to not heeding the lessons of the rise of Nazi Germany and repeating its deadly to marginalized peoples mistakes.

Conservatives are quick to call any news story or article criticizing them as ‘fake news’ and even call any news outlets critical to them ‘lugenpresse’.

That needs to stop before it does damage to our country we can’t fix in a few election cycles .