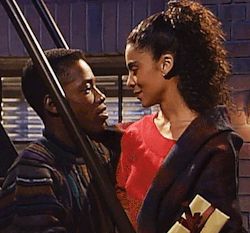 September 24 will mark the 30th anniversary of the debut of the iconic show ‘A Different World‘ that broadcast its first of over 100 episodes over six years in 1987.

And you longtime TransGriot readers know I love the show so much I’ve done A Different World anniversary quiz posts that you can try your luck at here, here and here.    I even wrote a post imaging what an  A Different World reboot set in this 2K10decade would be like.

The spinoff of The Cosby Show that was supposed to chronicles Denise Huxtable’s journey through her parent’s fictional HBCU alma mater Hillman College after it’s not well liked first season was retooled by new produced Debbie Allen into a realistic portrayal of HBCU campus life that tackled the issues roiling campuses in the late 1980’s and early 90’s from South African divestment, fraternity and sorority pledging, date rape, HIV-AIDS, racism to Desert Storm and the LA Riots.

Oh yeah, there was also a romance and marriage that developed between bougie diva Whitley Gilbert and nerdy genius Dwayne Wayne that basically became the relationship goal standard for Black couples

Mr. Gaines represents those elders you meet along the way that give you advice and that gentle push you need at just the right time to get you going in the right direction.

A Different World is still beloved 30 years after its initial episode was broadcast on NBC.  It is also credited with a major spike in HBCU enrollments during and after its broadcast run from 1987-1993

And because of its success, more shows featuring African American casts followed.

So happy anniversary A Different World!   I’ll post a link to those quiz answers later